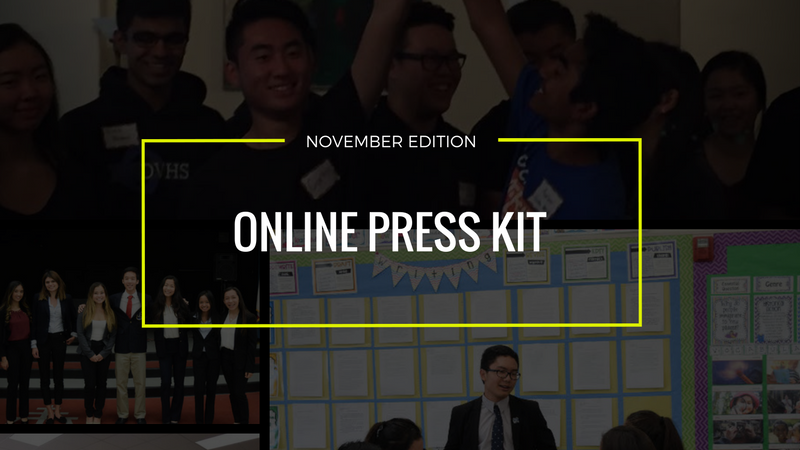 Letter from the Editor

To whom it may concern:
This Online Press Kit is for the use of the media, members, government officials, and any other community organizations interested in the activities of the high school members of California DECA. It is my hope that through this Kit that the communities supporting the chapters of California DECA would come to further understand the accomplishments and successes of the members. Included in this Kit are articles written and pictures taken by members in chapters from across the state, along with any newsletters and press releases created by California DECA this month. It is my great pleasure to introduce the California DECA Online Press Kit.
Sincerely,
Joel Beckwith, Vice President of Public Relations.

Mini Conference: The Start of an Amazing Year

(Riverside, CA) On Saturday November 5th, Martin Luther King DECA held the annual Mini Conference at Mark Twain Elementary School. Over 100 DECA members from seven high schools around Southern California gathered to compete in categories ranging from apparel to automotive to sports to hospitality services. Members took a 100 question test covering topics of marketing and hospitality and then performed a role-play in front of judges. Role-plays are essentially common business scenarios and the competitor is placed in a position where they must solve a problem and present their solution to a judge. At the awards ceremony, those who performed exceptionally in both components were recognized.

(Fremont, CA) It’s sad to say that DECA Month (November) has come to an end, but WHS DECA enjoyed every minute of it! As DECA Month is time to rejoice in past memories, we took a journey down memory lane with the DECA Month Photo Challenge. Every day, we posted pictures from our first NorCal CDC all the way to ICDC 2016. This month of recollection came to an end with our amazing FUN(draising) Week!

The Husky DECA FUN(draising) week consisted of four different fundraisers throughout the week. They varied from milk tea cafes to sit down buffets. Our chapter’s FUN(draising) week wasn’t only an opportunity for us to enjoy food, but also to bond as a chapter.
DECA Month has passed, but its beginning marked the start of the DECA Season. We can’t wait for NorCal!
For more information, contact Sai Atmakuri at saiatmakuri@yahoo.com

Then, in honor of DECA Pro Bono Week, the Mills High School DECA Chapter hosted an event featuring two corporate attorneys from AT&T. The students learned about how business and law go hand in hand, the legal aspects of social media, and business in the technology sector. It was fascinating to hear lawyers Marvin and Margaret discuss their pathways to their current careers, as well as the life and career advice they gave to the students.

Aislin Liu, Martin Luther King High School DECA
(Riverside, CA) Inspiring entrepreneurs are all around us! Members of the officer team invited two local business owners out to speak to the chapter and tell their story and give insight into the life of an entrepreneur. Jason Wong, from FifthTee, spoke about how being a DECA member helped him realize the importance of networking in business and played a huge role in his present-day success. Chris and Joel, from Break Down Walls, told their story behind their decision to move away from their career plans and pursue entrepreneurship. Both encouraged DECA members to pursue a career that would not feel like work and emphasized the importance of building a network. Members walked away inspired and with a new perspective on the business world out there, beyond DECA.

Throughout the month of November, several chapters in California hosted what have come to be known as Mini-Conferences. These are competitive conferences put on by a local chapter to prepare members for competition at the upcoming District Career Development Conferences. Often, other chapters are invited to these conferences, providing an excellent air of competitive spirit.
Chapters such as Dougherty Valley in Northern California and Martin Luther King in Southern California displayed excellent hospitality in inviting several chapters, including those who were competing for the first time, to their conferences. With workshops provided by chapter officers and state officers alike, rigorous testing, and actual role-plays and competitions, these Mini-Conferences excellently prepared members for the district conferences to come.

The Northern California Leadership Development Conference (LDC) kicked off in excellent style earlier this month for over 200 members at the UC Berkeley campus. The second conference in the California Fall Leadership Series, NorCal LDC saw high school students from across Northern California congregating for intensive workshops and leadership training.
Workshops covered a variety of topics such as competition, advocacy, social media, and more. One of the more popular workshops was the “Own Your Competition” workshop, which sought to help members grow in their competitive abilities.
After the workshops, members participated in several leadership training activities. One such activity was the Labyrinth, an escape room-style puzzle game that put members together to unlock a hidden treasure. Members left the conference feeling invigorated and ready to own their leadership.

California DECA was thrilled to announce the creation of a ICDC Pin Design Contest this month. The contest allows for members to develop designs for the California DECA trading pin at ICDC, the international conference for DECA with over 18,000 members in attendance. Members are encouraged to be creative and use the geography of the state as inspiration for their creations. The winning design will be developed and seen by the thousands of members and advisors attending ICDC in Anaheim, CA in April.
For more information, contact Joel Beckwith at publicrelationsvp@californiadeca.org

(Seattle, WA) On November 17, 2016, several California DECA members travelled to Seattle for DECA’s Western Region Leadership Conference. A three-day conference filled with workshops, presentations, and tours, WRLC never had a dull moment for attendees! The overlying theme for the conference was “Reign,” a nostalgic remembrance of the kings and queens of old. Members were encouraged to build their own empires and to “leave a legacy that lasts longer” than any ancient empires. At WRLC, California DECA members did just that.
Two full days of workshops were the main focus of the conference. These workshops delved into leadership tactics, college- and career-readiness, and competitive success. This was capped by the California DECA State Officer Team presenting a competition workshop to a full house of over 100 DECA members. Through each workshop, students were challenged to continue to better themselves as leaders and better the lives of those around them.
One of the greatest opportunities presented at WRLC was the ability to network with a diverse group of members. Students from the states of Washington, Oregon, California, Arizona, Montana, Colorado, New Mexico, and Nevada were present which provided unique interactions for all DECA members. Students were able to network with this diverse group, providing one of the greatest experiences a member can have.
All in all, WRLC in Seattle was a complete success. As the conference concluded, members were reminded to look forward to the next multi-state conference, the annual International Career Development Conference. This competitive conference is set to be held next April in Anaheim, CA.
For more information, contact Joel Beckwith at publicrelationsvp@californiadeca.org