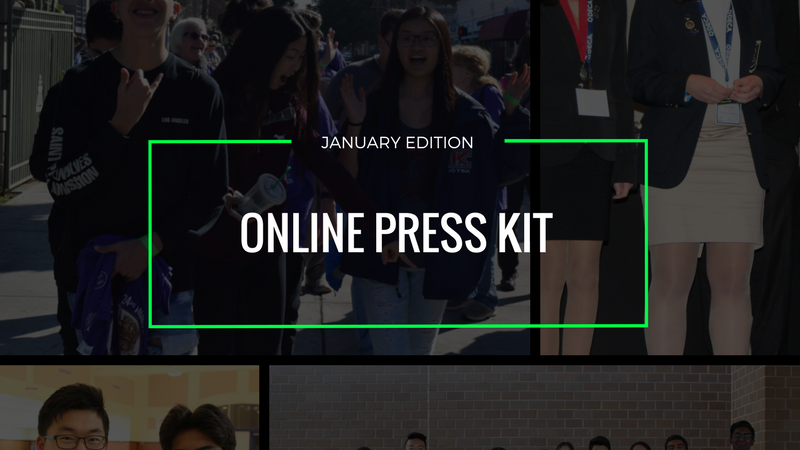 DVHS DECA BOOST held its first successful Mini Conference for the middle schoolers. Like high school mini conferences, the purpose of the conference was to simulate a business environment, while giving the students practice for competitive events. For the first conference, the BOOST students were allowed to compete in a role play event, such as an Individual Series Event. Each student conducted two role plays throughout the conference. The scores were later averaged and scaled to select the winners.
Near the end of the conference an Awards Ceremony was held. Students were recognized for top 8 in role play 1, top 8 in role play 2, and top 8 overall with certificates and medallions. In addition, those students with 100% homework completion received certificates of recognition.

Overall, the conference was a huge success and rewarding experience for every BOOST student. Based on feedback received, most students were able to gain effective feedback on how to improve their speaking and impromptu skills. Students who participated in this mini conference now feel more prepared to compete at the high school level next year. As the main purpose of BOOST is to help increase DVHS DECA’s competitive success in the long-term, this mini conference has brought the chapter one step closer to its goal.
For more information, please contact rithikrajani@gmail.com

The weekend of January 13th to January 15th was the Southern California Career Development Conference in sunny Anaheim, CA. MLK DECA brought 35 excited members, new and experienced alike, to competition; ready to make incredible memories! On Saturday night, MLK DECA continued its tradition of the Downtown Disney Scavenger Hunt. Nine teams explored Downtown Disney searching for portraits of Olaf and phone cases of Lightning McQueen, among other objects. Teams sprinted around the park, each trying to find every item on the list within an hour. Seeing their friends on different teams, the members tried to send them away from where scavenger hunt objects were, each with the goal of having their team win the scavenger hunt prize, bragging rights and ice cream! Through this friendly competition, MLK DECA became more bonded as a chapter and DECA family.
DECA members were recognized for their superior performance in competition at the Awards Session on Sunday morning. MLK DECA brought home a 2nd place in ASM (Kenley Hendrawan), 1st and 3rd place in FMS (Michelle Song, Sadaf Kadir), 1st and 2nd place in SEM (Aislin Liu, Angela Xu), 2nd place in STDM (Matthew Bowers & Chineye Ogbuchiekwe), and 1st and 3rd place in HTDM (Audrey Yao & Jaden Locke, Simrina Desar and Naneeta Desar). Additionally, MLK DECA swept QSRM, bringing home 1st, 2nd, and 3rd (Alexa Montegna, Hana Baig, Camryn Abucejo)! SoCal CDC kicked off the DECA competition season and MLK DECA is ready to make even more amazing memories and friendships at SCDC!
For more information, please contact aislinliu@gmail.com

NorCal CDC was held in San Ramon, CA on January 13-15, 2017. As Washington High School’s 5th NorCal, our members were excited and more prepared than ever. After putting in months of hard work and dedication, they were excited to test, compete, as well as meet new DECA members! NorCal CDC was a great way for us to connect as a chapter through the Talent Show, DECA Dance, and in general, a memorable weekend.
Overall, Washington DECA attended a successful Northern California Career Development Conference receiving the most awards ever. We cannot wait for State CDC!
For more information, please contact huskydeca@gmail.com

January 16th marks the day to celebrate and remember Martin Luther King and his achievements towards equality during the Civil Rights Movement. MLK DECA pays homage to the very man they are named after by participating in Riverside’s MLK Walk-a-thon. DECA officers Aislin Liu and Angela Xu led hundreds of walkers in the Pledge of Allegiance. MLK DECA members walked 5 kilometers to honor Martin Luther King’s legacy and ended at a Rock-a-thon, a collection of many booths such as henna and fitness. MLK DECA continues on its tradition of being involved in the community and putting their support behind matters important to them.
For more information, please contact aislinliu@gmail.com

DVHS DECA has one of its most successful NorCal CDC events this year. The chapter had 62 teams place top 10 in their events – over 50% of the chapter! In addition, the chapter had over 20 teams place top three in their events! DVHS DECA was able to have so many people be successful in their events due to the each member’s dedication to DECA, and the officer team’s everlasting effort to teach every member. Throughout the course of the school year, DVHS DECA has been able to attend two mini conferences and host its own for first and second year members. In addition, to ensure that each member is actively involved in the chapter, each member must attend at least 5 preparation sessions before NorCal CDC. This system has allowed members to be more successful in their events, because of the competitive insight and information they gain during these meetings. The officer team is able to convey information regarding role play strategies, presentation skills, and written reports throughout the course of these weekly meetings.

Wenhan Fang, Vice President of Silicon Valley
More than 700 members from Silicon Valley DECA attended the 10th annual Silicon Valley Career Development Conference from January 6-8, 2017 in San Jose, CA. The conference showcased the competitive excellence of Silicon Valley DECA members in role-play and written events.
The conference began on Friday, January 6th with registration, a President’s Council Meeting, and two testing sessions. All attendees were then welcomed at the Opening Session. The session included a special announcement from the DECA parent’s association, which donated a check to support SV DECA members. There was also a presentation from Kapion Education, which aims to start DECA chapters in Japan, and expand the global impact of DECA. The evening concluded with the SV DECA’s Got Talent show, where the twelve-member dance group from Valley Christian High School won the opportunity to pie four SVDAT members in the face.
The following day was marked by competitive events with Individual Series, Team Decision Making, and Professional selling in the morning, and and the second Individual Series role-play and Principles events in the afternoon. Written events were also held in the afternoon. In the evening, voting delegates and DECA members were invited to attend the Election Session, where a new Vice President of Silicon Valley was elected. The DECA dance was held at the conclusion of the night, giving members the opportunity to make new friends and unwind after a full day of competition.
The next morning, conference attendees came to the Closing Session and Awards Ceremony. During the Mini Awards Session, members were recognized for placing top eight and top three in testing or role-play elements of their events. Following breakfast, we concluded with the Grand Awards Session, where members were recognized for placing top eight and top three overall in their event. The conference was was adjourned with the farewell addresses of current SVDAT members, as well as the announcement of the new Vice President of Silicon Valley: Cindy Guo.
Current Vice President of Silicon Valley, Wenhan Fang, summarized the conference by saying, “The conference was a great way of displaying the level of talent, entrepreneurial spirit, and passion within the Silicon Valley District. The conference ran smoothly, and I am confident that our members will continue to excel at the State Career Development Conference and beyond.”

Team 66 spent the weekend following NorCal CDC and SoCal CDC planning for the penultimate DECA conference of the year: The 2017 State Career Development Conference. The conference will take place March 2-6 in Santa Clara, CA and with nearly 2,000 attendees. At their Winter Leadership Retreat, your State Officer Team spent time preparing scripts, social activities, a very special social media challenge, and more. Team 66 cannot wait to own their future with you at SCDC.

The results are in and a winning trading pin design concept has been selected for ICDC 2017! Congratulations to Alisa Su from The Harker School in the Silicon Valley District. Team 66 is excited for the pin to be unveiled at ICDC in Anaheim!

Team 66 is developing a statewide social media challenge to launch at the 2017 State Career Development Conference. The challenge will feature members of Team 66 as team leaders as chapters work together to go for the gold. Be sure to bring your competitive spirit!