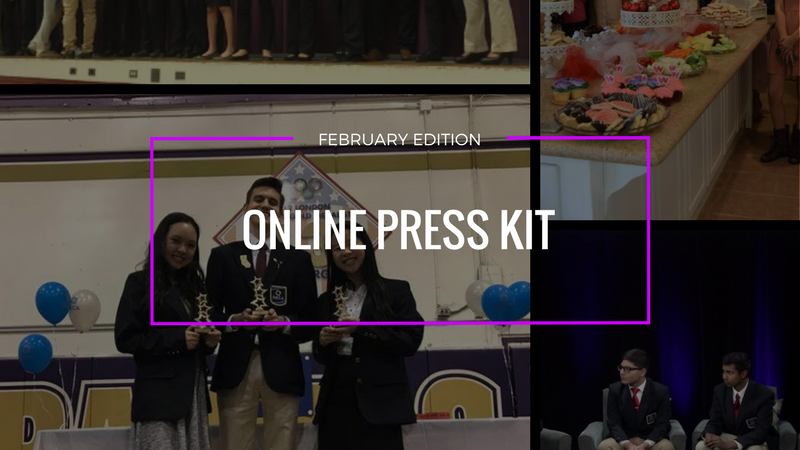 Irvington DECA officers Jasmine Tong-Seely, Kevin Mao, Sam Moturi, and Vishaank Ghai appeared on the Fremont Unified School District’s “Community Conversations” show in light of the organization’s recent success at the Northern California Career Development Conference. Co-hosted by K.K. Kaneshiro and Fremont Unified School District superintendent Dr. Jim Morris, the show seeks to highlight exceptional achievements from students within the local school district.
Discussing the significance of DECA and its ability to provide members with networking opportunities, leadership development, and business skills, Irvington DECA representatives were able to engage with the school district and local community, attracting more attention to the organization and its benefits and opportunities. The show touched upon the recent successes and achievements of the chapter as well as the opportunities for future personal growth provided by DECA.
Impressed by the achievements of the chapter, Dr. Jim Morris remarked, “This Irvington group is our powerhouse.” Furthermore, the superintendent touched upon DECA’s ability to prepare members for the future, stating, “Not only do they learn that specific technical skill, but it’s really the soft skills that [employers are looking for].”
Career Technical Education (CTE) was also an important topic discussed on the show. Noting Irvington DECA’s role as the leader of the CTE advocacy effort in the school district, Dr. Jim Morris also stated, “These students really stepped up as advocates for other students about the value of DECA”. Irvington’s lobbying efforts included outreach to politicians as well as organizing a district-wide testimony at a school board meeting last year involving current members and alumni, eventually resulting in the widespread implementation of CTE courses within the school district.
Irvington DECA’s appearance on Community Conversations provided an opportunity to further raise awareness within the local community, promoting DECA’s ability to equip students with the skills and connections to develop into successful leaders and entrepreneurs in the future. The rendition was released to the public domain on February 3 online as well as on the local Fremont Unified School District channel 26. The full show can be found here.
For more information, please contact kevin@ihs-deca.org

Members of MLK DECA, Naneeta Desar and Emily Zhou, planned and organized a Valentine’s Benefit Tea on February 4th for the chapter’s Community Service Project. The tea was held at MLK DECA’s advisor, Mrs. Blue’s, house, which was decorated with plenty of lace, pink, and hearts to get into the Valentine’s Day spirit. MLK teachers and members’ parents were invited to the tea, where donations were optional, but encouraged. All money raised will be donated to the Loma Linda Cancer Research Center. The committee worked hard, making countless sandwiches and arranging cookies on platters, as well as washing used platters and tea cups. Those who attended had a great time and enjoyed plenty of delicious food. Additionally, the adults were very impressed with the dedication MLK DECA had to community outreach. The tea was an overall success, raising over $400 in donations for the Loma Linda Cancer Research Center! MLK DECA continues with its community outreach activities, reiterating MLK DECA’s strong value in giving back.
For more information, please contact mlkdeca@yahoo.com

Ashton Lam, Amador Valley High School DECA
Amador Valley DECA held its third successful MiniCon (short for Mini Conference) on Friday, February 24 for younger DECA competitors and other DECA members who were unable to compete this year. Like others hosted previously, this conference served to simulate the actual competitive environment in DECA and allowed students to practice their presentation and business skills.

For our conference, first-year or second-year DECA students from Amador Valley, Foothill, and Dougherty Valley High Schools competed in Principles of Hospitality, Quick Serve Restaurant Management, or Business Law and Ethics Team Decision Making, while older members served as judges, workshop hosts, or volunteers to facilitate the event and ensure smooth operations. The competitors rotated between testing, presentation, and workshop sessions in three distinct cycles so the amount of people in each event was manageable.
After competing, all the participants sat down to a pasta and pizza dinner, and students were recognized for their achievements. Those in the Top 3 or Top 8 walked off stage with a respective medal or certificate of recognition.

Overall, the conference was a grand success for all the chapters and participants involved. Students were able to gain valuable and applicable feedback on their presentational skills, and many felt better prepared to compete at State or pursue DECA next year. As this was the third mini-conference of the year for Amador Valley, in comparison to the single MiniCon hosted in previous years, the event bolstered Amador Valley’s continual commitment to fostering the success of both nearby chapters and its members.
For more information, please contact ashton.avdeca@gmail.com

Rithik Rajani, Dougherty Valley High School DECA
Ever since DVHS DECA’s district competition in January, the officer team and members have been working hard to ensure personal and overall success at SCDC. The week after NorCal CDC, the DVHS DECA officer team met up to create a plan to increase competitive success at SCDC.
DVHS DECA utilized its Active Chapter Points system to ensure that members would use their opportunities to their advantages. DVHS DECA had decided to use three main methods to increase competitive success:

DVHS DECA looks forward to seeing its efforts pay off at SCDC and has already seen much improvement from its members over the course of two months!
For more information, please contact rithikrajani@gmail.com

The Mini conference was held to introduce middle school members and the current freshman class to DECA. Christopher Carlson, the Vice President of Southern California also attended the event. At minicon, students took a cluster exam and performed a role play. Wells Fargo was also at the event and hosted a presentation and shared work experience tips.
Overall, the chapter’s first minicon and DECA Week was a success!
For more information, please contact diamondbardeca@gmail.com

Recruiting the “Future” of MLK DECA

Aislin Liu, Martin Luther King High School DECA
MLK DECA took the opportunity to continue to build their chapter to be stronger than ever. During February, a few MLK DECA officers and dedicated members visited MLK’s two feeder middle schools, Frank A. Miller and Amelia Earhart Middle Schools, to make a presentation to all the incoming eighth graders explaining what DECA is and encouraging them to join. Enticing the eighth graders with jokes and funny anecdotes, the presenters explained the countless ways DECA has benefited them and allowed them to make amazing memories of a lifetime. With the new CTE course requirement, MLK DECA saw it extremely important to reach out early so anyone who is interested can plan ahead to fulfill the requirement. In the upcoming year, MLK will be offering even more CTE courses which will allow the MLK DECA chapter to grow larger and stronger. The eighth graders were intrigued by the hilarious stories and exciting experiences the presenters told and filled up several sign-up sheets. The upcoming year is sure to be an exciting year of growth in membership and overall vigor for MLK DECA!

As SCDC rapidly approaches, your State Officer Team has been hard at work. From social media to graphic design to speeches, Team 66 has been working hard to help you own your future at SCDC. With competition soon arriving, a reminder has been sent for all members to continue practicing. In addition, the Opening Session will take place on Friday night, rather than Thursday this year. Team 66 hopes everyone enjoys the conference!

CTE Month A Success in California