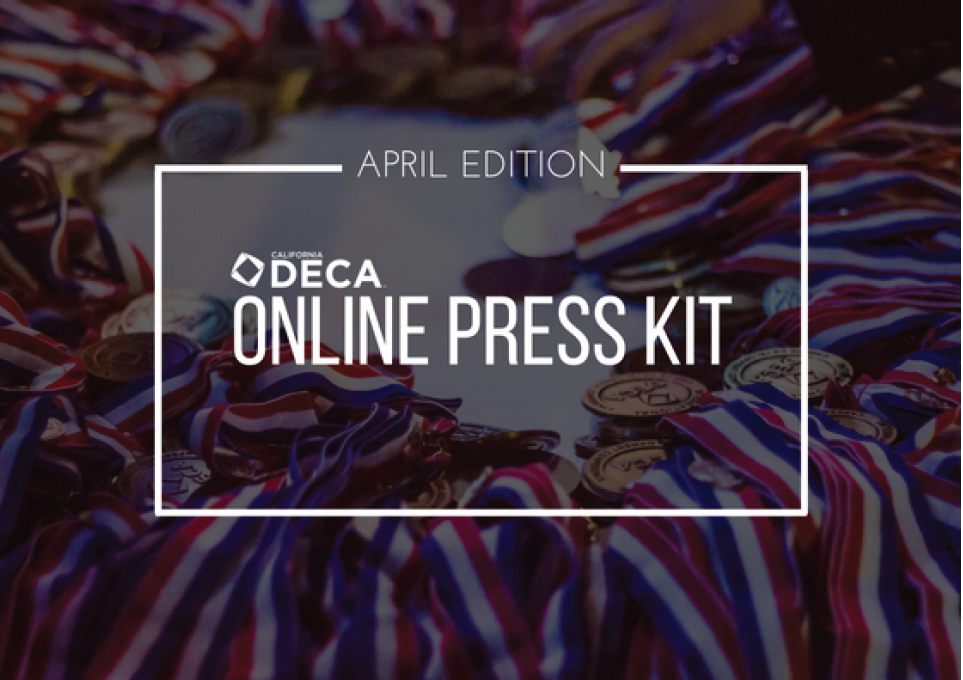 Message From the President

This was an incredibly busy month for not just the State Officer Team, but all of California DECA. We all owned our future at ICDC in Anaheim, with California once again proving our competitive excellence with 80 finalists, 50 Top 10 finishes, and 14 trophies! From riding rollercoasters to dominating the competition, California DECA had an incredible conference.
As for the state officer team, ICDC was an amazing opportunity for us to meet and interact with the lifeblood of California DECA: the members. Thank you for inspiring us with your energy and reminding us why we chose to run for office: to serve and spread the unique DECA experience.
ICDC was also a chance for us to familiarize ourselves with other associations from across the country and around the world. We helped elect your new Executive President, Jaron May, as well as the new Western Region Vice President, Haley Haas.
For the month ahead, we plan on finalizing our Program of Leadership that will lay out our goals for the coming year. We will also be advocating for DECA, helping to push for increased funding and support within California’s legislature for CTE programs and CTSOs. As this DECA year comes to a close, feel free to invite any state officers to attend your end-of-the-year banquets to celebrate what a wonderful year it has been.
Best wishes!

This past month, twenty-six Amador Valley DECA competitors headed to the pinnacle of DECA competition: the International Career Development Conference in Anaheim, California from April 26-29. Along with all fifty states, several other regions, including Canada, Guam, Mexico, China, Puerto Rico, Spain, and South Korea, sent members to compete in events covering hospitality, management, marketing, and finance.
Since August, students have spent countless hours preparing their presentations, studying for tests, and writing detailed reports in order to advance past the regional and state competitions. ICDC allows students to showcase skills that are crucial for success in today’s dynamic business world.
The Amador Valley chapter has been consistently successful at international competition in the past, with a long list of members who have placed Top 3. These members have created a legacy of chapter success, and Amador Valley DECA currently stands as one of the most competitively successful chapters in California.
In total, Amador Valley DECA had eight teams qualify for the final found, or Top 20. Of those eight teams, four proceeded to the Top 10, and two of those landed on the podium.  The teams include:

Competing against hundreds of other members from all fifty states and several other countries around the world, countless students from the Fremont Unified School District were recognized as international finalists in their events at the 2017 International Career Development Conference in Anaheim, California from April 26-29.
ICDC is the pinnacle of the DECA year, in which more than 19,000 high school students, advisors, alumni, and professionals gather for several days of DECA activities and competition. While some participated in the Emerging Leader Series to develop their collaboration and critical thinking, other members showcased their career knowledge and skills by participating in DECA’s industry-validated competitive events, which areas range from marketing to entrepreneurship. The members, who qualified by placing Top 4 at California’s State Career Development Conference, were evaluated by more than 1,000 business professionals and experts.
FUSD students placed Top 3 in two events:

Several other FUSD students were finalists in the following categories:

From April 25-30, thirty students and chaperones from Harker DECA traveled to Anaheim to attend the 2017 International Career Development Conference for a week of tough competition, inspiring leadership academies, and unforgettable memories.
During the first two days, students had the opportunity to explore the Disneyland Hotel and Downtown Disney, participate in the DECA 5k, prepare for competition at the California training session, enjoy a chapter dinner at the Rainforest Café, and attend the Grand Opening Session at the convention center, which included a FIDM-sponsored fashion show, various keynote speakers, and musical performances by Echosmith and Billy Gilman.
During the next two days, students competed in their respective events or attended the Emerging Leader Series academies, and later enjoyed a night at the DECA Party at Universal Studios Hollywood.
On the last day, students gathered for the Achievement Awards Session to find out whether they would compete later that day. In total, six teams from Harker DECA finalized during the preliminary awards session, with three of those teams moving on to Top 10 and two landing on the podium at the Grand Awards Session.
The finalists from Harker are as follows:

“In terms of competition, Harker DECA had its most successful ICDC thus far, which is really a result of everyone’s hard work over the past year,” said Shreyas Chandrashekaran (11), Harker DECA Co-Chief Executive Officer. “I loved seeing how much these students learned and improved regardless of whether they were finalists or not. Everyone was cheering on and rooting for their fellow students, and there was a real sense of camaraderie among them. We really came together as a group and that really contributed to the overall high energy of the chapter this year.”
ICDC 2017 was definitely one to remember for attendees from the numerous pleasures, cheers, and memories made. This final conference of the year was one many people will keep in their hearts forever.

Amazement and laughter were both present at Foothill High School DECA’s talent show. With over 200 attendees, Foothill DECA was able to raise over $1,500, donating half of the profits to Doctors Without Borders.
Attendees included students from all grade levels who came to take a night off and go to “Somewhere in Paradise,” the tropical theme of the talent show.  The show gave students a chance to demonstrate their hidden talents; acts ranged from Abel John playing music on his calculator to Jasmine Tong-Seely and Cindy Guo singing a duet.

This was not Foothill DECA’s first rodeo; the chapter has been hosting these shows since 2010, making this their 7th consecutive show. These talent shows have become an annual event in which students look forward to watching their friends perform.
DECA may be an organization that prepares emerging leaders for careers in the business industry, but it also brings different students together to have fun and create lifelong friendships.