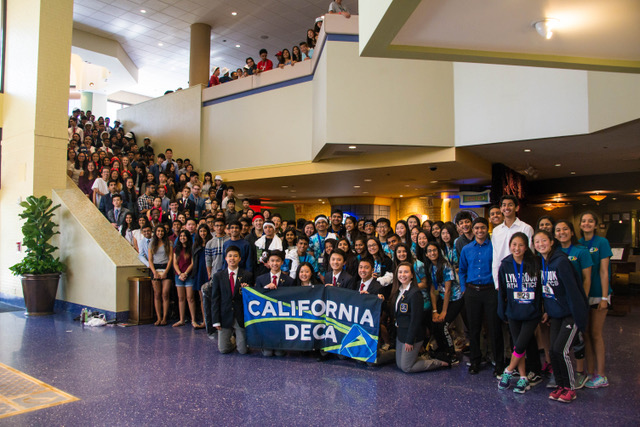 This past year represented one of the greatest years for California DECA with grand achievements and milestones. Starting off, the year saw the amazing leadership of California DECA’s Team 66, consisting of Moksh Jawa, Lenexa Gonsalves, Joel Beckwith, Yash Desai, Wenhan Fang, and Christopher Carlsen.
Under Team 66, California DECA saw nearly 4,500 members over eighty chapters and three districts as California DECA expanded into more high school classrooms statewide at a phenomenal pace. From LACE, to LDC, to Districts, to SCDC, and to ICDC, California DECA members shined on stage as they carried their year of hard work and their state to success. With 74 finalists, 14 Top 3, and 6 1st Place champions at DECA Inc.’s 2017 International Career Development Conference, California DECA represented some of the best and brightest minds around the world.
Approximately 90% of our members felt that they had learned 21st century skills, were empowered to be an effective leader, and were prepared academically for college and careers.

“DECA has empowered me to influence the lives of others at a young age by being a more effective leader and entrepreneur.” – Moksh Jawa

But what also came this year was the new California DECA leadership team, Team 67, installed during SCDC as California DECA’s student leaders for the new 2017–2018 year. Team 67, consisting of David Xu, Jasmine Tong-Seely, Ashton Lam, Christopher Kusumonegoro, Cindy Guo, and Dragon Chan, eagerly sprung to action during ICDC and the Strategic Planning Retreat.
The new state leadership team started the year strong at ICDC, representing California DECA as the host state of the conference, conveniently located in Anaheim, CA. The state officer teams helped out DECA Inc. officers throughout the conference, prepared member registration bags, and networked with other state officers. Team 67 also had the pleasure of meeting and caucusing with DECA Inc.’s new student leaders, proud to be represented by Jaron May as the DECA Inc.’s 2017–2018 Executive President.
Advocacy took the spotlight for Team 67, as the team met with California’s legislators to discuss the impact of Career and Technical Education (CTE) on California’s future as well as advocated for more funding for such programs. The team also took the time to discuss the new CTE regulations and its impact on students statewide this year as well as meet with California DECA’s Board of Directors. In addition, Team 67 took the time to prepare and plan out their Program of Leadership for the new year and support statewide activities such as the new District Action Team for Northern California led by Mr. Wu.
2016 was definitely a year to remember, seeing California DECA grow and overcome many obstacles to unleash the diamond it is today. Under Team 67, California DECA looks to new horizons and hopes to aspire to new heights in the upcoming year.