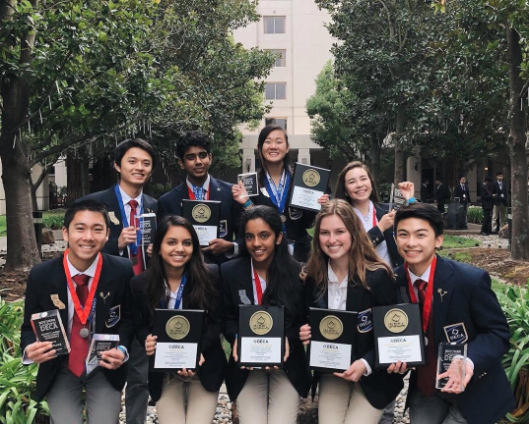 California DECA officially began the 2018 competition season with the Silicon Valley CDC (January 5-7) and the Northern and Southern California CDCs (January 12-14). Over 1,900 members attended the conferences for a weekend of networking, competitive events, and unforgettable memories.
Silicon Valley Career Development Conference
This year’s SVCDC brought excitement and stress and everything in between. Members from across the region came together to compete, make memories, and share their love for Silicon Valley DECA.
On the first day, members enjoyed the memorable Opening Session, listening to creative songs and poems and watching the state officers get pied by the SV Factor Talent Show winner. Saturday’s competition went smoothly – all events were not only on time, but were even ahead of schedule. While many competitors felt the rush of adrenaline before presenting, both the alumni and judges were impressed that no one arrive late to his or her event.
At Sunday’s Award Session, members cheered at the top of their lungs for each person called on stage. All of the Silicon Valley chapters – Monta Vista, Mission San Jose, Harker, Valley Christian, Lynbrook, Gunn, BASIS Independent, Milpitas, and Carlmont – were represented during Grand Awards. In addition, the Vice President of Silicon Valley-elect, Enya Lu, was announced that morning. Regardless of results, members walked out of the hotel as better leaders, competitors, and networkers ready to continue learning and growing.
Silicon Valley DECA is ready to sweep at SCDC!

Southern California Career Development Conference
#SoCalCDC 2018 kicked off to an epic start with the annual SoCal Talent Show on Friday night, featuring live performances from all across Southern California. Members cheered on the contestants with the energy lasting through the night. Hyped up for a #Limitless weekend of competition, networking, and workshops, SoCal members went into their competitive events Saturday confident to take home that #CAGold.
Following a packed day of events, exams, and exciting workshops, members had the chance to relax with chapter dinners and trips to Downtown Disney, the site of ICDC 2017. Walking back with Mickey ears and gloves, the SoCal Social lit up the night with a DECA Trivia Kahoot, Minute to Win It challenges, Wii stations, board games, and a photo booth for members to connect with other emerging leaders from Southern California. Finally, members experienced an amazing awards session Sunday morning, recognizing the top performers in each event, and the announcement of the next SoCal VP, John “Duke” O’Callahan.
With a #Limitless weekend behind us, now it’s time to start prepping for SCDC, the next stepping stone to ICDC!
Northern California Career Development Conference
The 2018 Northern California Career Development Conference was packed with fun activities that was enjoyed by over 900 members across the district! Chapters arrived early Friday afternoon to ace their cluster exams after dedicating hours to studying. Then, at Opening Session, members got pumped for the start of the #Limitless competition season and cheered during NorCal’s Got Talent where they witnessed some of the best talents across the region.
On Saturday, members competed in their events, filling the conference with high energy as people prepared to present their innovative ideas. At night, members’ hard work was rewarded with an epic DECA Dance and DECA Game Room, and chapters competed in the Dance vs. Game Room social media challenge by posting pictures with the hashtags: #DECADanceOff and #DECAGameOn.
Finally, on Sunday morning, top competitors were recognized for all their hard work! The NorCal District Action Team was also recognized for their dedication in helping plan and run the NorCal conference, and after a long wait, the VP-Elect of Norcal, Ananya Veeraragavan, was announced!
Congratulations to everyone who competed and stay #LIMITLESS for states!