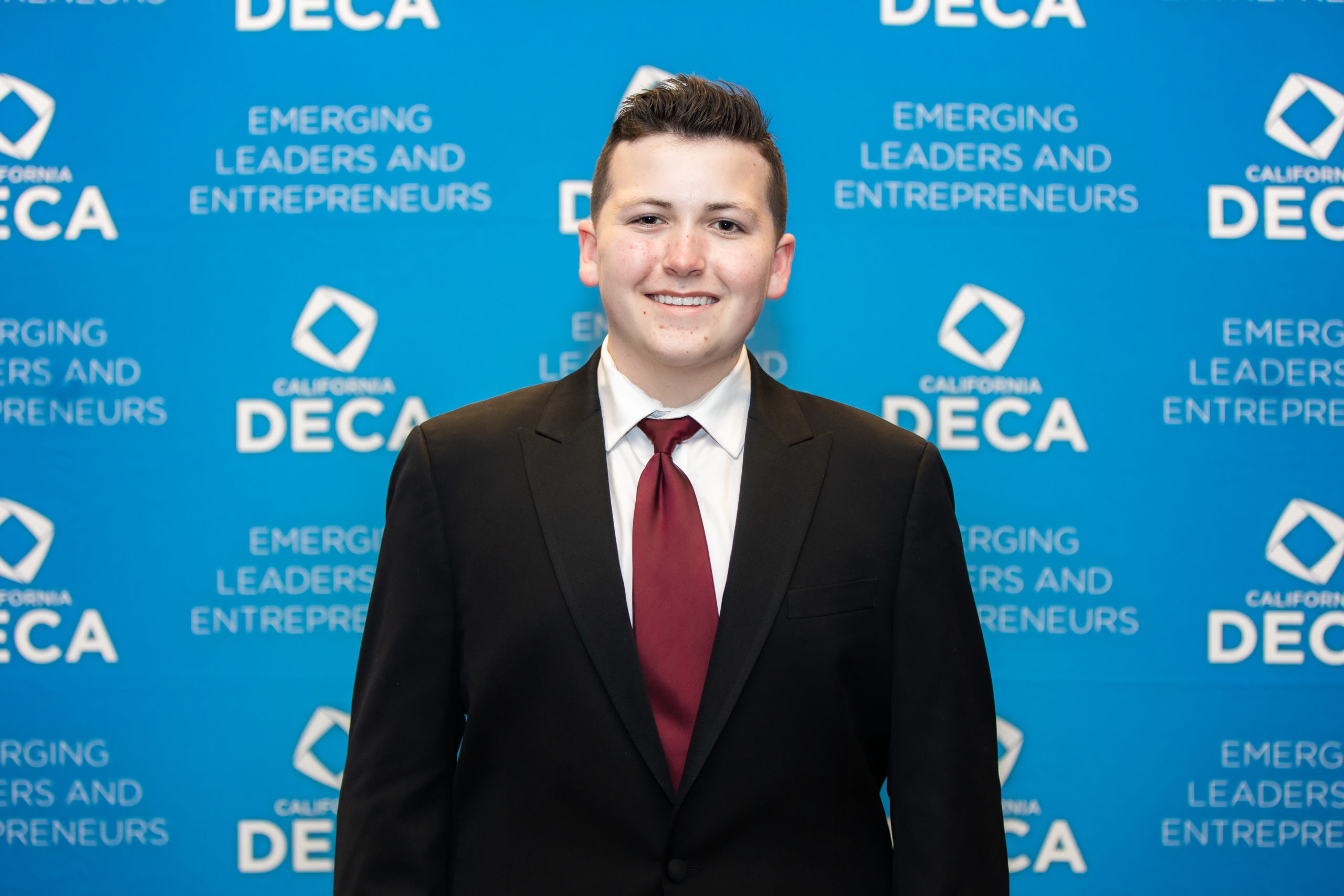 Daniel is a senior at Del Norte High School and is thrilled to serve as your California DECA State President this year.

Daniel joined DECA his freshman year and at his first mini-conference, he quickly became drawn to the many delights DECA had to offer, netting some sub-event awards, and becoming determined to excel higher faster. He went on to the Southern California district conference, competing in Hotel and Lodging Management, and swept his event, which ignited a passion for DECA that led him down the path of networking, opportunity, and business relations. Through this path, he now stands ready to keep going forward in DECA.

In his freshman year, Daniel was appointed his chapter’s secretary and served in that position all the way through his sophomore year. He cooked up some projects that came to fruition, such as recruitment methods for the start of the year and presentations in business classes to grow the chapter and helped to bring his chapter to new heights. He was given the opportunity to serve California DECA as Team 71’s Vice President of Marketing last year and has now gotten the chance to be your State President this year.

Daniel can often be seen working on some of his other extracurriculars outside of DECA, such as the organization GENup which covers political advocacy, and ASB. He’s very active in politics and always looking for ways to help bring his peers into that spotlight, while also working on public speaking and how to improve his school. 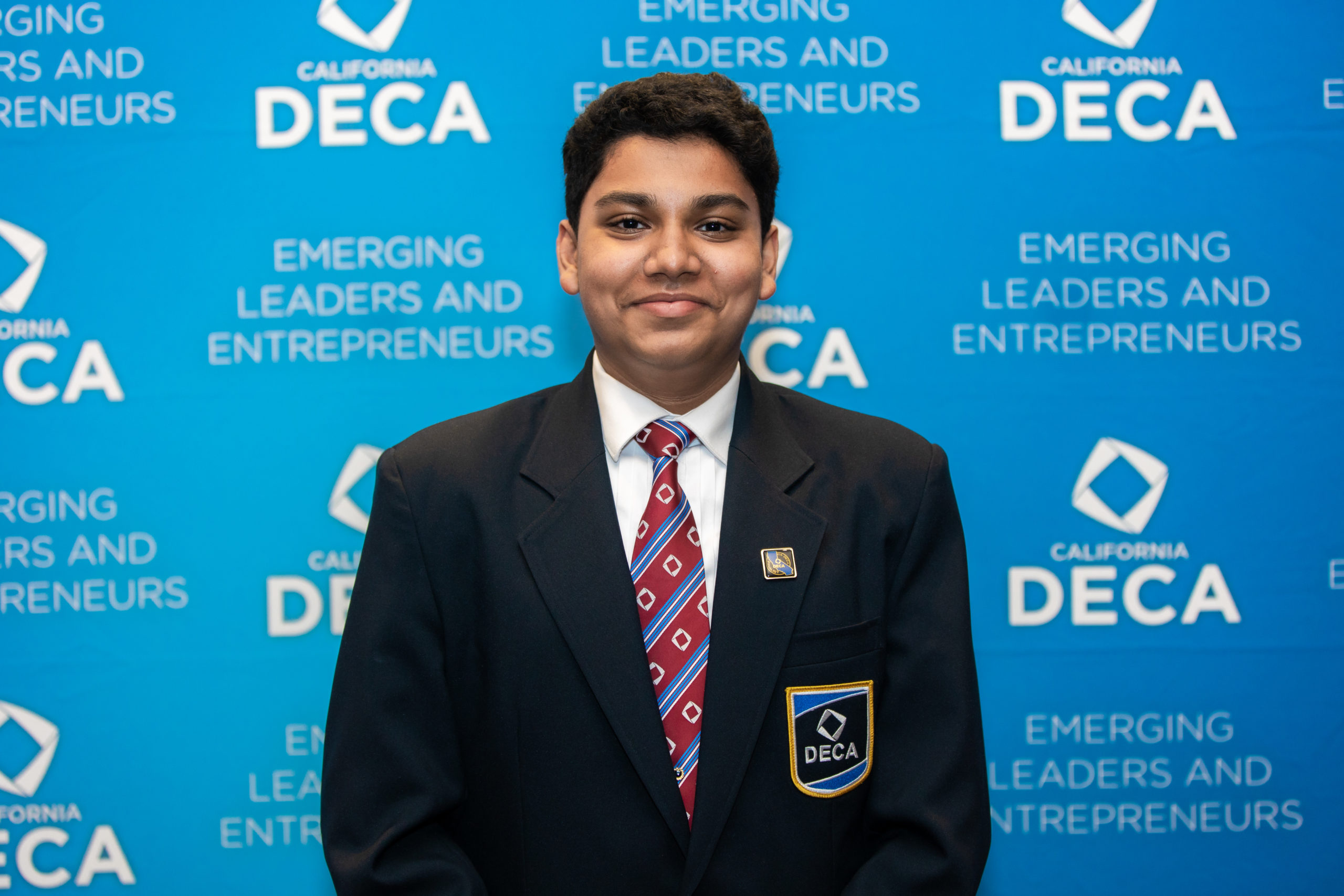 Nitin is a junior at BASIS Independent Silicon Valley and is honored to serve as your California DECA Vice President of Leadership this year.

Nitin joined DECA in his sophomore year and quickly learned that resilience and hard work is always the key to success. With his passion for business, he realized how vital critical thinking and problem-solving skills are for young budding entrepreneurs and found himself surrounded by other change-makers dedicated to growing their skills. As a result, DECA has given Nitin a place where he can be himself, and sincerely believes that it has shaped him into the person he is today.

Despite not serving a prior DECA chapter officer position, Nitin led his chapter to create many resources that aided with competition preparation. Through it all, Nitin has enjoyed helping more people grow in this organization. He has competed in various events in DECA, including placing first at SCDC and double qualifying for ICDC with the Stock Market Game and individual series event. Nitin’s experiences in DECA have guided him to utilize different perspectives and further delve into the world around him.

Outside of DECA, Nitin has progressed in various business and STEM activities. He demonstrates leadership potential, through conducting research projects in behavioral economics, automation, and public policy. He also had the opportunity to live in Europe for two years during middle school and soon developed traveling as a hobby. Furthermore, his enthralling travel experience improved his interpersonal and independent skills, confidence, passion for connecting with global people, and experience with diverse cultures and history. Learning to “adopt and adapt,” he perceived that the world is much larger than what we see as DECA members living in California and hopes to grow these global networks into California DECA. His other hobbies include playing the trumpet, binging the Simpsons, playing Beat Saber, and exploring places with friends.

Nitin hopes to pursue a major in business and technology in college. With all the knowledge gained, his ambition is to create opportunities for students worldwide to have the necessary tools to realize their business leadership potential and pave the way for future generations to be successful entrepreneurs. Nitin strongly believes that when we help others rise, we soar.

Above all, Nitin is highly thankful to everyone who supported him in his DECA journey and is ecstatic to work with the rest of the state officers to bring California DECA to newer heights. 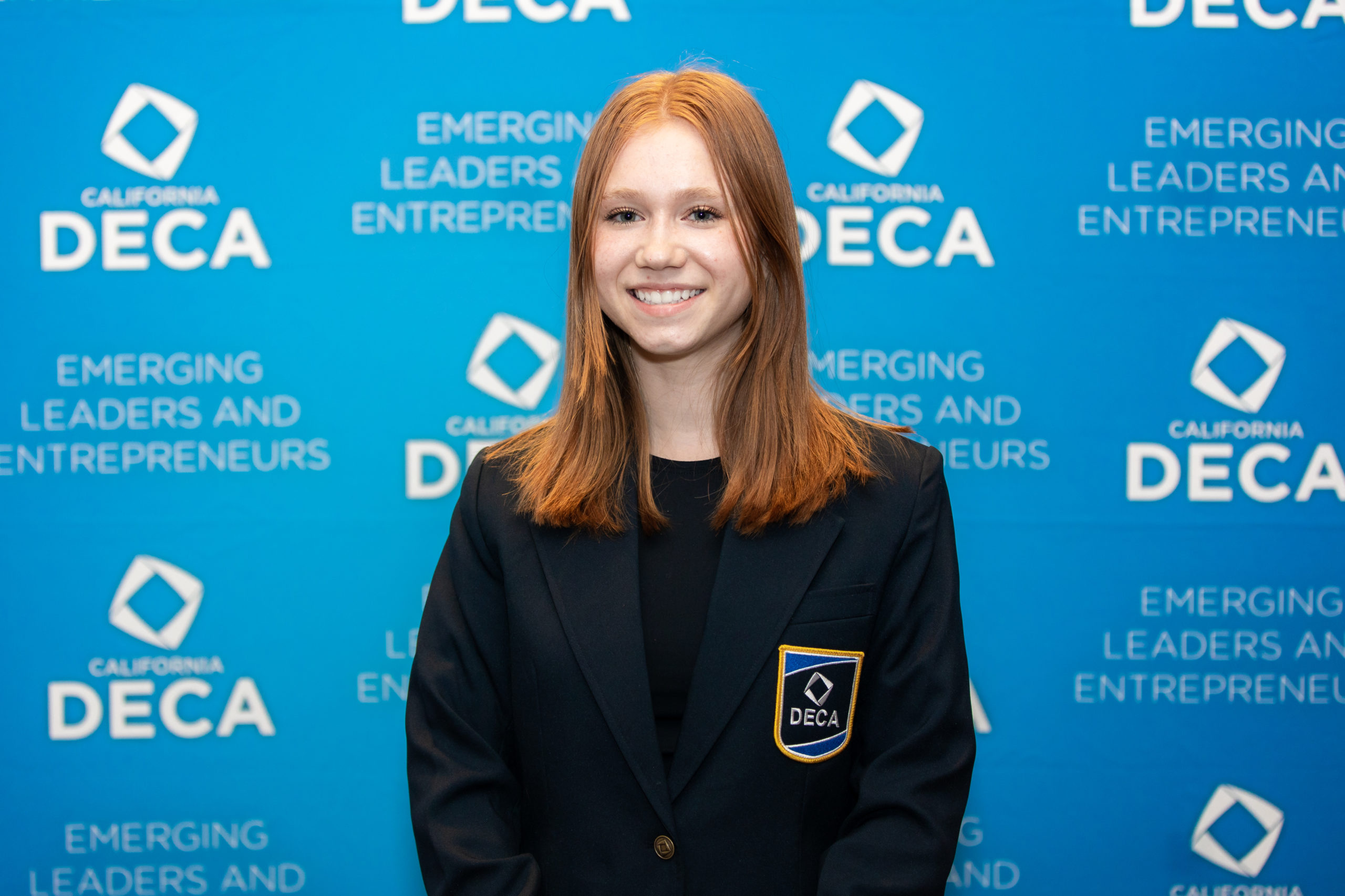 Kate Clifford is this year’s VP of Marketing for California DECA and will be a senior at Foothill High School this fall. Kate lived in Alabama during her freshman year, where she was the Freshman VP of her DECA chapter. As an officer, she got a firsthand look into the inner workings of her officer team and all of the hard work and commitment that goes into the function of a successful DECA chapter. She moved to California her sophomore year, where she instantly reconnected with DECA at her new high school and became involved with her chapter as a competitor and Interim team member. Kate has been a DECA member for three years and has loved every minute of it! She has qualified for ICDC three years in a row and has held a leadership position within her chapter every year of her membership. Most recently, she served as her chapter’s Director of Technology, where she gained valuable experience in leadership, design, social media management, and teamwork. DECA has provided Kate with so many opportunities to connect with fellow business-minded individuals and grow her passion for the business world. In college, Kate plans to major in business, with specific interests in areas including entrepreneurship, marketing, and real estate. She is looking forward to serving California DECA’s members this year as part of Team 72! 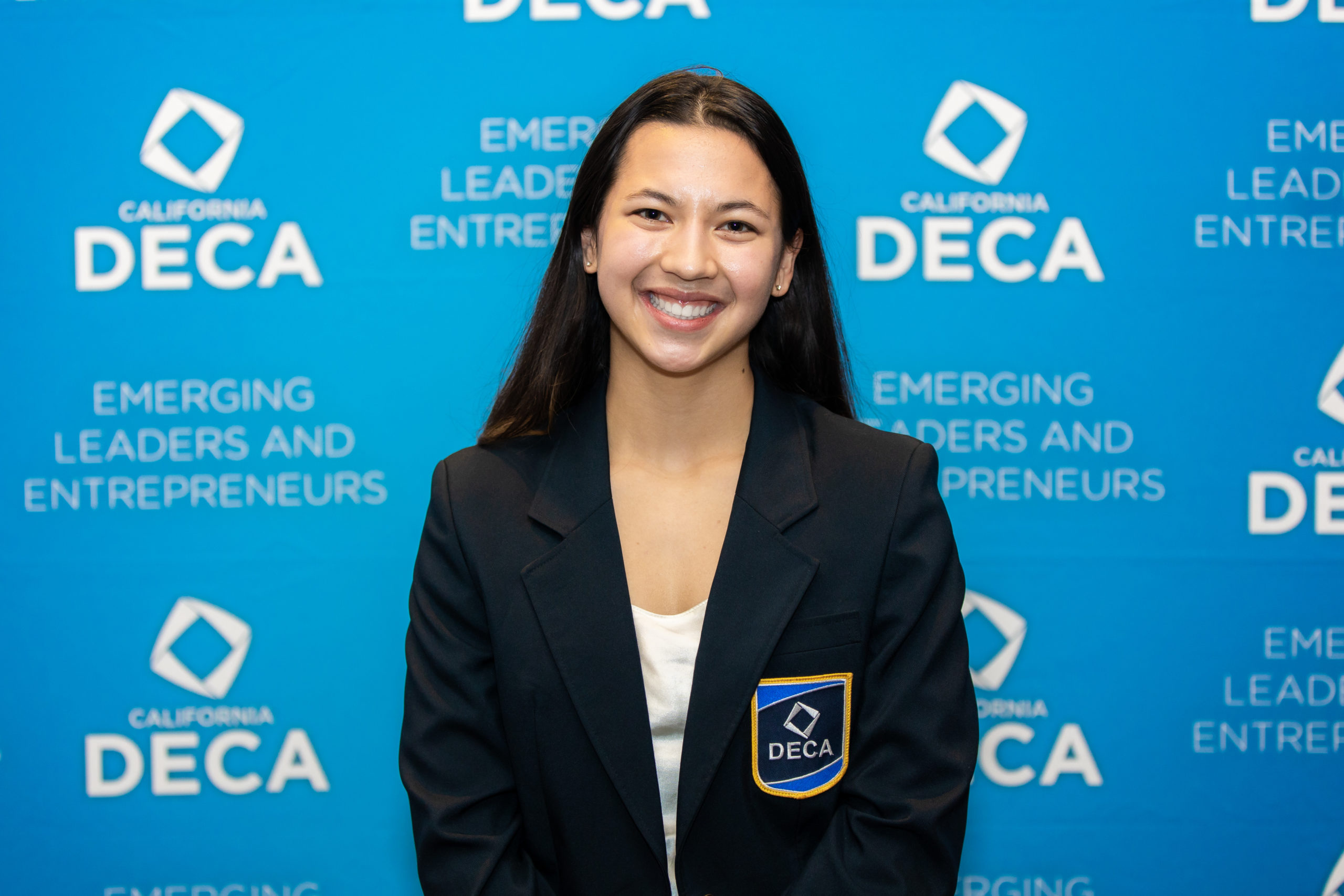 Sara is a senior at Amador Valley High School and is excited to serve as your California DECA Vice President of Northern California this year.

With encouragement from upper-classmen friends, Sara joined DECA as a sophomore and immediately found a place at home in her school’s chapter. Despite the isolation that came with online learning, Sara was able to use DECA to stay connected with her classmates and meet fellow competitors all around California. Through late-night calls with her written event team, she learned the value of persistence, accountability, and communication. Because of DECA, Sara has developed a passion for business, travel, and networking, which she hopes to incorporate into her future education. She is so grateful for the lifelong friendships she has made during her DECA journey and cannot wait to spend another year with the organization.

During her junior year in high school, Sara served as the VP of Chapter Development for Amador Valley High School DECA, communicating between chapters, promoting on Instagram, and organizing Amador’s mentor/mentee system. At the same time, Sara served as the VP of Hospitality for the Northern California District Action Team. In this role, she supported Northern California by presenting at Minicons and communicating with smaller chapters to boost engagement.

Outside of DECA, Sara remains active in her community. She volunteers with the Red Cross and works as an umpire for the Pleasanton Girls Softball League. In her free time, she enjoys running track, driving around the Bay Area (backroads only), and rewatching Glee (strictly seasons 1-3).

Sara is extremely grateful for the opportunity to serve as a California DECA State Officer, and would like to thank her friends, mentors, fellow chapter members, and advisors for their continued encouragement and support. She is looking forward to an amazing year of enthusiasm and growth with both the state officer team, DAT, and California DECA! 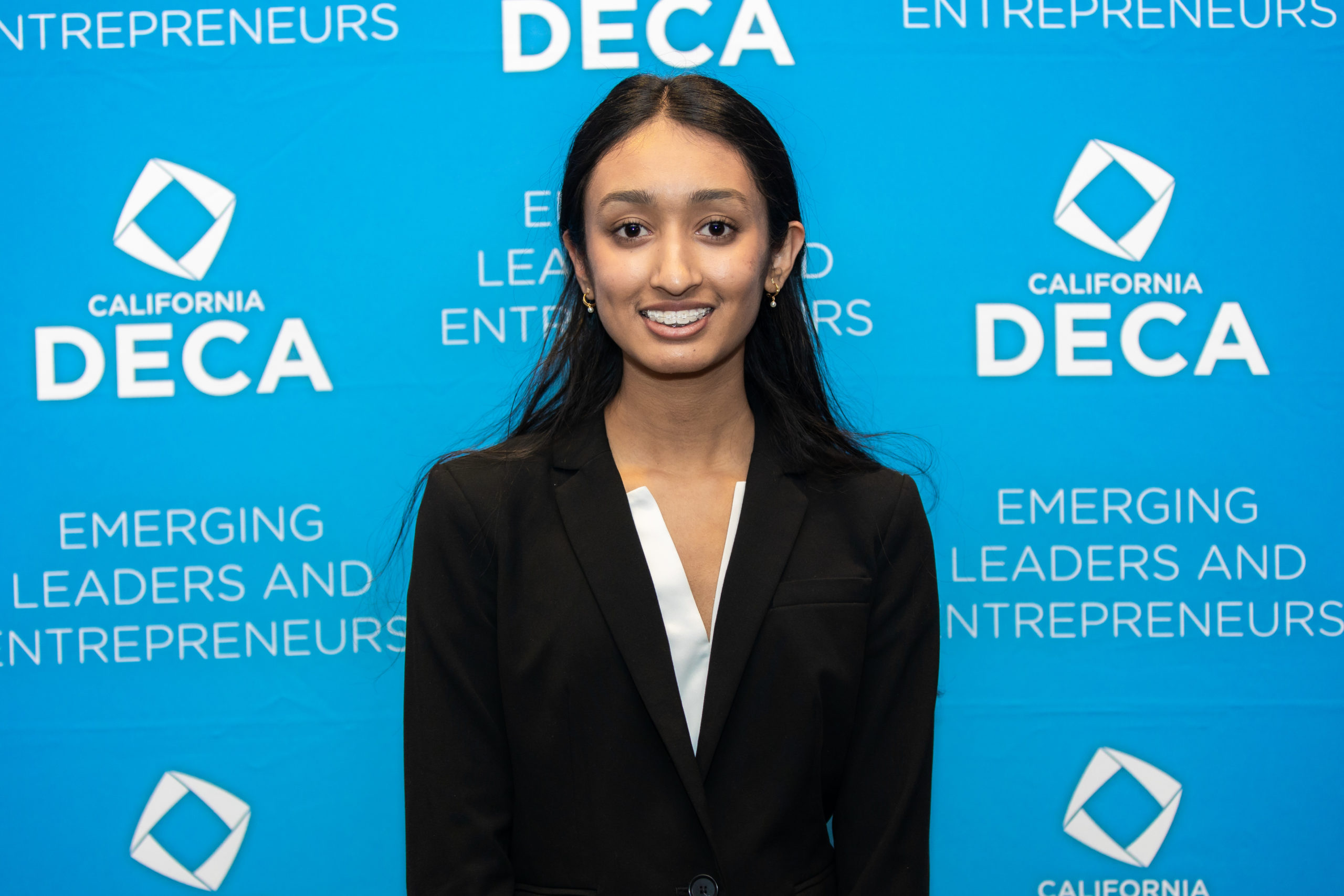 Vineeta Muvvala is a senior at Lynbrook High School and is excited to serve as your CA DECA Vice President of Silicon Valley this year.

Currently, Vineeta attends Lynbrook High School and has been a member of DECA for the past three years. As a mere freshman, Vineeta joined DECA to hone her entrepreneurial skills and learn more about the business world. As Vineeta became more involved, she not only developed valuable business skills but also had the opportunity to meet new students from across California and learn about their distinctive experiences. She is extremely grateful for the numerous memories DECA gave her and hopes to contribute back to her local DECA community.

Throughout Vineeta’s DECA career, Vineeta has engaged in numerous leadership and community service activities. As a freshman, Vineeta helped lead Lynbrook High School’s annual entrepreneurship incubator in which students had the opportunities to showcase their business ideas to legitimate investors. As a sophomore, Vineeta served as the Director of Principles and helped introduce the Principles Events to her chapter’s first-year members. Currently, Vineeta serves as Lynbrook High School’s co-president and is extremely grateful to lead her officer team and support her members.
In her free time, Vineeta enjoys participating in engineering competitions and digital artwork. She also loves meeting new people and participating in social service activities in her local community. As Vineeta continues her DECA journey, she is excited to meet more CA DECA members and lead Silicon Valley’s high school chapters! 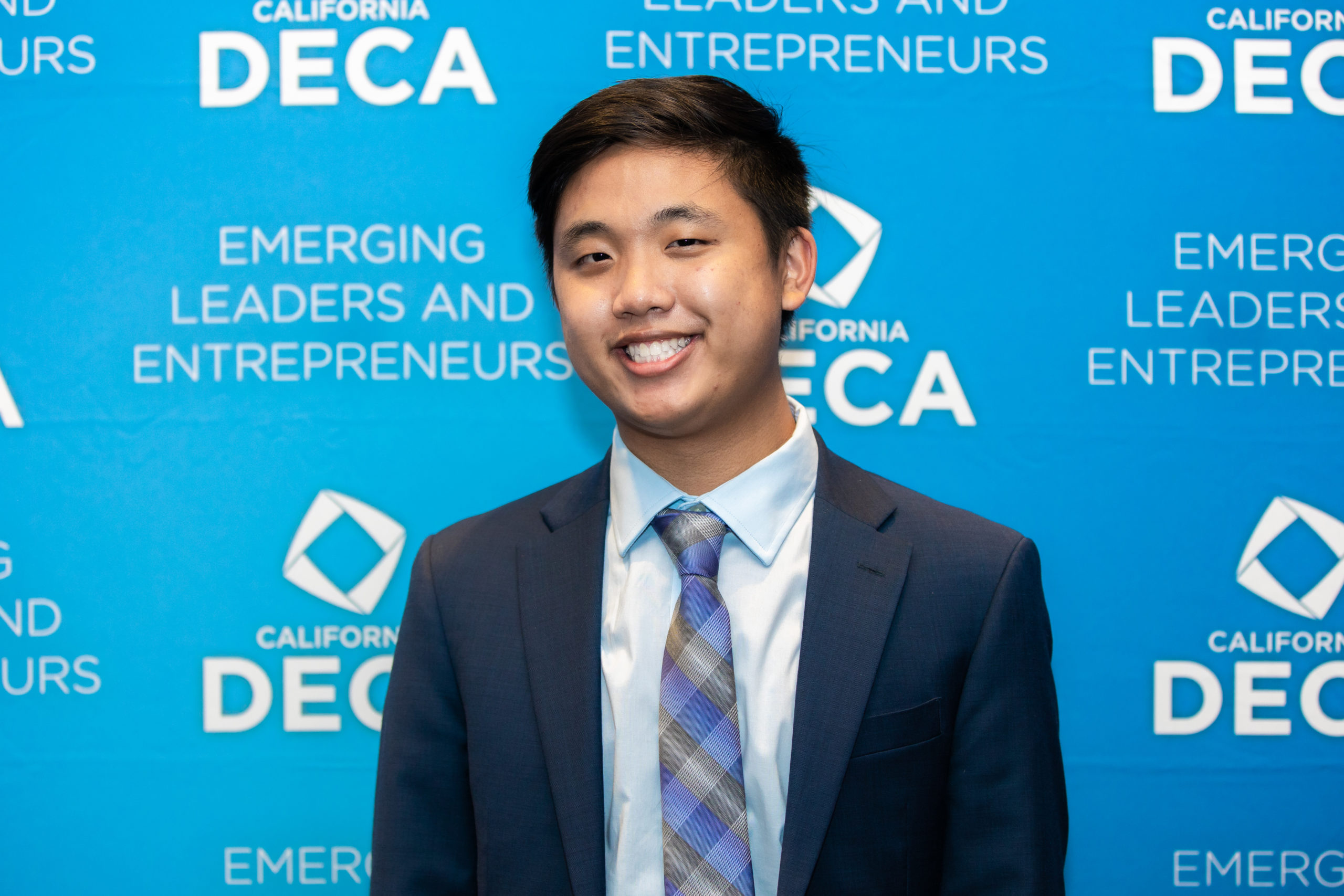 Brayden is a junior at Del Norte High School thrilled to serve as your California DECA Vice President of Southern California this year. Brayden joined DECA in his freshman year, where he attended his first mini-conference. It was here that he quickly became captivated by the numerous opportunities DECA has to offer. From the numerous competitions to networking opportunities, Brayden knew he wanted to continue with DECA throughout his entire high school career. Brayden is grateful for the experiences he has gained from being a part of DECA.

In his Junior year, Brayden was thrilled to have been selected to serve as his chapter’s Vice President of Competition and served in that role until the end of that year. It was here he implemented many new and exciting programs for his chapter including a chapter marketing campaign that saw the chapter’s SCDC attendance double and the first competitive training series leading to nearly all members placing Top 4 at the SoCal Leadership Conference.

Aside from DECA, Brayden is involved with his school’s ASB where he is responsible for leading over 150 on-campus clubs. He also works closely with the Poway Unified School District as part of the Superintendent Advisory Committee where he helps lead programs such as their Middle School Mental Health Conference. In his free time, you can find Brayden going on long bike rides, exploring new places all around San Diego and playing volleyball with friends.

Going into the new term, Brayden is grateful for the opportunity to lead Southern California and for all of the support he has received along the way. From the chapters and members that assisted in his campaign, to his advisors, Mr. Campillo and Mr. Buxton, he is thankful for all of the help and support that has helped make this journey possible. Brayden looks forward to the opportunity to serve as Team 72’s Vice President of Southern California, and is looking forward to an exciting year. 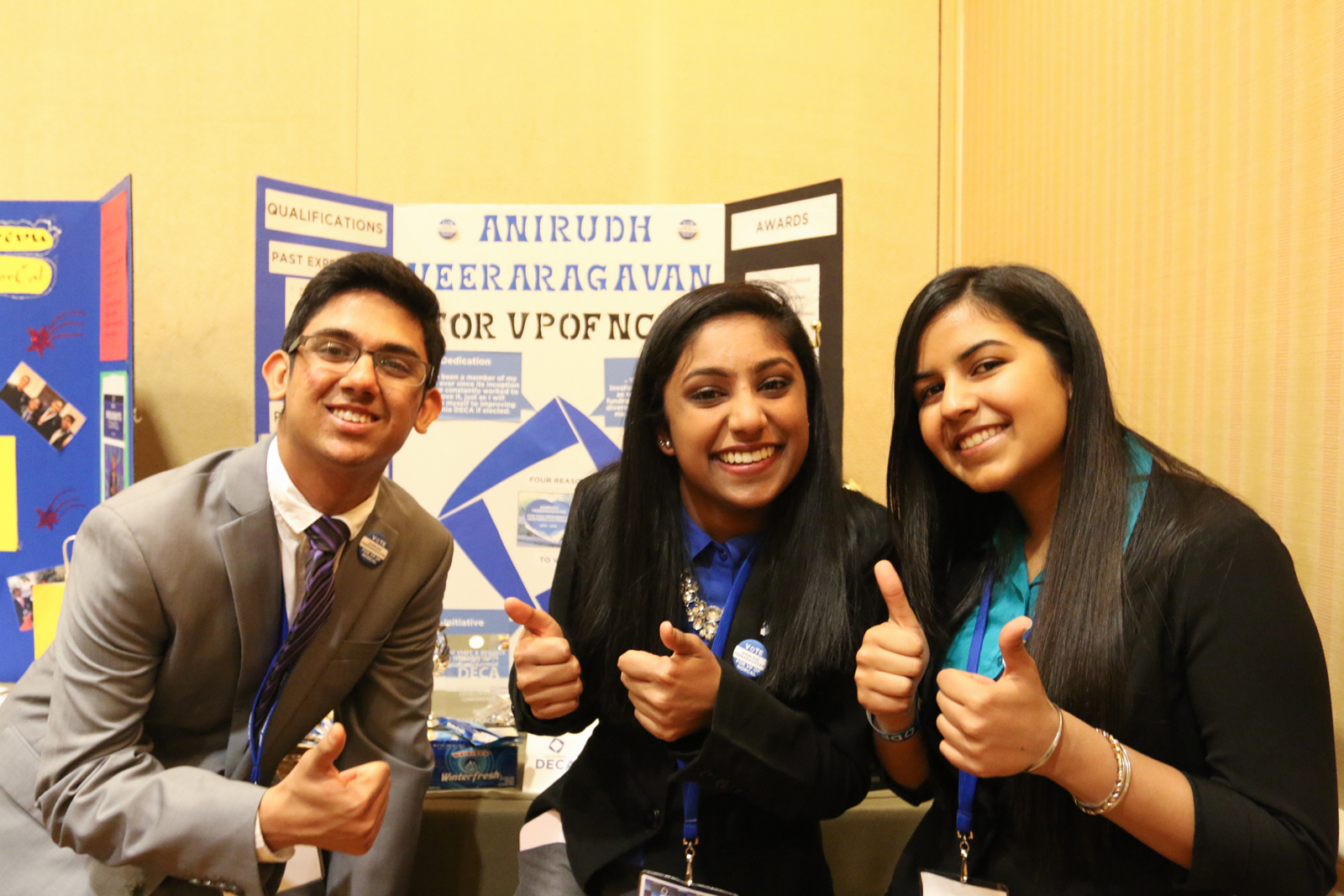 Are you interested in making a difference in DECA, representing over 5,000 of your peers, and developing your professional skills? Do you want to achieve all of this while having fun and doing a little traveling? If you answered yes to both of these questions then you should definitely consider running for a position on California DECA’s State Officer Team. Read the State Officer Candidate Packet or contact a current state officer to learn more about how you can take advantage of the epic experience!