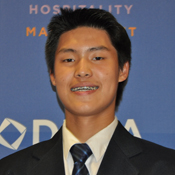 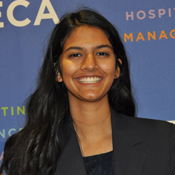 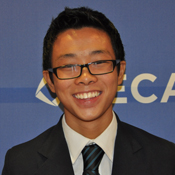 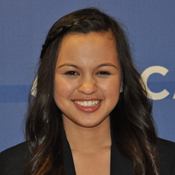 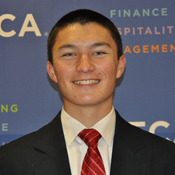 As a junior at Mission San Jose High School in Fremont, Dustin Chiang is elated to serve as California DECA’s State President. His journey began freshman year when he decided to pursue his interest in business by joining DECA. He quickly fell in love with the organization for the people he met, the skills he learned, and the unforgettable experiences that DECA offered. Dustin became a chapter officer during his sophomore year and boosted membership while developing more training for members. Dustin has also found success competitively in consistently placing in the Top 3 of his role-play at the District and State Levels as well as winning 1st place in the Western Region with his partner, Hemang, for Virtual Business Challenge-Retail.

Apart from DECA, Dustin has the privilege of being his school’s ASB Vice President in addition to serving on the board of a student club, Mission:SOS, which works to reduce student stress on campus. Dustin has also chartered his own community service club, the Bay Area Leo Club, and is an avid lover of baseball. Besides playing high school baseball, Dustin is the Umpire-in-Chief for Mission San Jose Little League in which he recruits, trains, and schedules a large network of volunteer parent umpires to officiate youth baseball.

Dustin is tremendously grateful to his parents, friends, and chapter, as well as his chapter advisor Nancy Benton and all of California DECA for their trust and support. With every single member in mind, Dustin looks forward to creating an unforgettable year for everybody as your 2013-2014 California DECA State President.

Apoorva Panse is a senior from Martin Luther King High School and is proud to serve as your Vice President of Communications. She first became a member of DECA during her sophomore year. Coming from another school, she had no idea what to expect and never imagined the big impact this organization would have on her.  She was able to meet new people, experience the thrill of district and state conferences and gain new opportunities. Last year, she served as her chapter’s Vice President of Communications and increased membership, introduced a website and created a chapter newsletter. As a third year member, she understands that the best part of DECA is not competition, but the friends and the memories made. She hopes to make the DECA experience even better through increased communication between chapters.

Apart from DECA, Apoorva is involved in many clubs on campus and community activities. She has been a member of Riverside’s Youth Grantmakers Committee for three years and through this program has attended community functions and visited many local non-profit organizations. She is the captain of her school’s Science Olympiad team, public relations officer of American Sign Language and a member of National Honor’s Society. In addition, she does biomedical research at the University of California-Riverside, and volunteers at rural eye camps in India over the summer.

During her free time, Apoorva enjoys photography, traveling, experimenting with Photoshop and monitoring her various social media sites. Apoorva is more than thrilled to serve California DECA and plans to make the upcoming DECA year the best one yet!

Byron Lo is currently a senior at Foothill High School, and he looks forward to his fourth and final year in DECA as Vice President of the Northern California District.  Previously serving as the Vice President of Project Management at Foothill DECA, Byron has had extensive leadership and execution experience, and he hopes to apply and grow these skills as a state officer.

Byron attended his first competition during his sophomore year at the Northern District Career Development Conference. This experience opened his eyes to the opportunities, benefits, and relationships fostered through DECA. At the State Career Development Conference, Byron felt the electricity of thousands of students gathered together for a single organization, and he felt at home.

Music has always been a big part of Byron’s life. He is an active leader and talented trumpeter in the Foothill Marching Band, Jazz Band, and Wind Ensemble. As a frequent soloist, Byron has developed the ability to perform well under pressure and respond well to the constituent parts of the band, qualities that will propel him forward as a state officer. In addition, Byron served as the Brass Captain for the Foothill Marching Band, which allowed him to exercise his leadership skills with over 150 musicians. In his spare time, Byron enjoys playing basketball and frisbee, hanging out with friends, and whipping up tasty quesadillas.

Byron is very appreciative of all the support given to him by his family, friends and chapter advisor, Tami Raaker. Moving forward, he hopes to continue the long, successful legacy of the Northern California District, and will work diligently and passionately to reach new heights.

Margarita Oreta, a four-year member from the City of Riverside, is excited to serve as your 2013-2014 Vice President of Southern California.

Margarita served as a chapter officer for two years at Martin Luther King High School. As a chapter officer, she was voted most valuable member. Aside from DECA, Margarita is also involved in ASB, Riverside Youth Council, Science Olympiad, and National Honors Society. Through her activities, Margarita has learned valuable leadership skills that will be beneficial to California DECA this upcoming year.

Without a doubt, joining DECA has been the best decision Margarita has made yet. Not only has DECA helped enhance her public speaking skills and business knowledge, her experience in DECA has allowed her to meet great people and make memories that will last for a lifetime.

Up until her freshman year, Margarita always thought she would pursue a career in the medical field, however DECA has helped her realize her passion for business. She plans to major in International Business in Fall 2014.

In her free time, Margarita enjoys watching her favorite movies over and over again. She also spends her free time deciding on which filter to use on her Instagram pictures since there are just so many great filters to choose from.

To say that Margarita is passionate about DECA would be an understatement. She wants to make a lasting difference and see California DECA rise to the top!

Thomas Lee is a junior at Amador Valley High School and is excited to serve as the California DECA State Vice President of Public Relations. Thomas joined DECA as a sophomore, unsure of what he was getting himself into, but after his first competition he knew that this was where he belonged. Unsatisfied with his results at the Northern California Conference, Thomas worked diligently and went on to place third at the state level and seventh internationally for his Sports and Entertainment Promotion Plan. Thomas affirmed his commitment to this organization by serving as Amador Valley DECA’s Vice President of Communications and Public Relations.

Soccer has played an unquestionable role in Thomas’s life for over seven years, and the hard work and dedication put forth over this period of time allowed him to become a starter on Amador Valley’s Varsity Soccer Team as a sophomore. Thomas’s incorrigible love for sports expands beyond soccer into almost every sport imaginable. He’s always ready for a one-on-one game in basketball or a race on bike or on foot.

In addition to DECA and soccer, Thomas finds great joy in experiencing other cultures and trying different cuisines.  Thomas takes special interest in French culture. He is a member of the French Honor Society at Amador Valley and he has studied this language for five years.

Thomas is excited to work with his fellow State Officers and connect with members across the state in order to make a lasting impact on California DECA.

Bella Zhang is a junior at Monta Vista High School and is excited to serve as State Vice President of Silicon Valley.  A newly minted freshman, she was introduced to DECA and immediately fell in love with the organization. DECA has given her the opportunity to expand her knowledge of the business world, as well as so many other aspects in her life.

Through DECA, Bella has experienced numerous events, not just state and international DECA conferences (though those have been life changing as well). She has been to local business meetings and Star Award Gala’s, and has seen how impactful DECA is within the community. She is amazed that thousands of students are impacted by DECA to this day, and enjoys seeing DECA members move forward to achieve their goals. Being elected as the President of Silicon Valley DECA has also given her the opportunity to change her district at a more personal level, whether it be increasing DECA membership or giving back to the community.

DECA may be her everything, but she has a life outside of the organization. Since she was in first grade, she found a love for soccer and has been playing ever since. During her sophomore year, Bella joined the Varsity soccer team and learned the importance of team work, as well as the ups and downs of being one of the underclassmen on the team. She loves to play violin and has won awards at the US Open Music Competition. Bella is a frequent jogger, amateur skier, nature-lover, and terrible baker, but loves trying all of them.

She is extremely thankful for all the support her chapter, chapter advisor, Carl Schmidt, and DECA members have given her. She can’t wait to help California DECA excel.