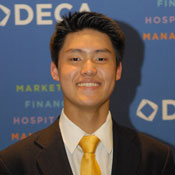 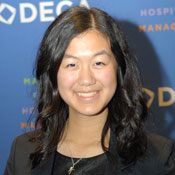 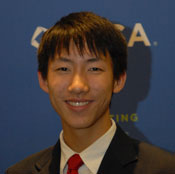 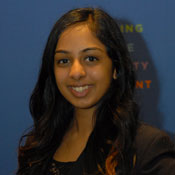 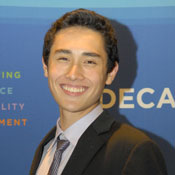 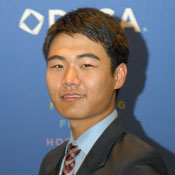 Dustin Chiang, from Mission San Jose High School, is excited to enter his second term this year as California DECA State President. He truly loves DECA for its opportunities to gain invaluable real-world experiences while making friends and creating memories that will last a lifetime.

Throughout his four years as a member, Dustin’s journey has included becoming the International Champion in Restaurant and Food Service Management at the 2013 International Career Development Conference in Anaheim in addition to meeting with key elected officials like Senator Barbara Boxer and State Superintendent of Public Instruction Tom Torlakson to advocate for DECA.

Apart from the organization, Dustin also serves as his high school’s ASB President, directing and supervising his school’s Leadership II class, which plans various student events on campus, from student orientation to dances and everything in between. He also does a wide variety of community service and enjoys umpiring youth baseball at his local Little League.

Dustin greatly appreciates the support of his chapter, family, friends, and all of DECA for this amazing opportunity. Dustin is incredibly proud of the accomplishments of Team 63 and hopes to bring in his knowledge and experience to propel California DECA’s members and chapters above and beyond in this next year.

Sophia Yang is a student from Amador Valley High School and is excited to serve as your Vice President of Communications. Freshmen year, she started DECA very confused and lost, not sure of what a roleplay was and what “promotion” meant. However, under the guidance of her advisor, Mrs. Laurie Andrews, and the officer team and mentors, she was able to dive deeper into DECA and qualified for the International Career Development Conference with her partner.

Competition is an important aspect of DECA, but twenty years from now, Sophia will look back and remember the late nights she spent with her best friend watching food network and singing Disney songs in the hallways. The memories created and friendships made are unforgettable.

Apart from DECA, Sophia is involved in Science Olympiad. She competes with the high school team and coaches the middle school teams. Also, she enjoys volunteering at Valleycare Medical Center and serving as an advocate for the youth court.

In her free time, Sophia enjoys watching The Sound of Music, sing-a-long version of course, on repeat. Sophia is also very active on her various social media accounts and enjoys working with photos.

Sophia is very thankful for all the support she has received from her family, advisor, chapter, and friends. Looking forward to connecting with California DECA members, Sophia is thrilled to work with her team to lead California DECA to make it count!

Shreya Bommireddi is a student at Amador Valley High School and is excited to serve as State Vice President of Northern California for 2014-2015.
Shreya attended her first DECA conference her freshman year at the Northern District Career Development Conference, and has been an active member for three years. DECA impacted her life by opening new doors to the business world and creating friendships that will last forever.

Shreya is a part of many clubs and organizations. Shreya was recently a marketing communications intern for a non-profit organization, Asante Africa. She currently serves as President for Habitat for Humanity, and is passionate about giving back to the community. She is also part of her Varsity Tennis team, and was captain of her Junior Varsity team her sophomore year. These organizations have taught Shreya to embody leadership skills, which she hopes to apply to her state officer position.

Shreya is thankful for her parents, friends, chapter, and chapter advisor Laurie Andrews. She is thrilled to work with Team 64 and lead California DECA to a year of infinite success.

Yahn Bruggeman is a student at Santa Monica High School and is thrilled to be your Southern California Vice President. He moved to Santa Monica from Colorado, and wandered as a lost soul into the first Santa Monica DECA meeting. After his first conference, he knew DECA was the perfect fit. He placed 3rd in Principles of Marketing on his first Southern California District Conference and 2nd in role play. After visiting his second District Conferences, he placed 2nd in testing, role play 1, role play 2, and overall for Human Resources Management.

Yahn is active as a representative of one his school’s five houses within Student Government. Along with fellow peers in student government, Yahn is responsible for planning and leading many activities across campus He is also active as part of the Santa Monica Red Cross Chapter and has wrestled on his school’s varsity wrestling team. Yahn also served in various leadership positions within his Boy Scout Troop and strives to obtain the rank of Eagle Scout. He plans to major in a math related field such as Engineering or Finance in college, and feels that DECA has helped on the path to learning his passions and help him engage and experience in real world experience.

Yahn wants to thank all those responsible for helping him along his path, including his mother, his advisor, and all of Southern California DECA. He knows he is ready to tackle Southern California, and is eager to serve as your Vice President.

Currently a student at Irvington High School in Fremont, Greg Chi is eager to serve as your California DECA Vice President of Public Relations. Because of his strong interest in business, Greg realized that DECA would be truly the organization for him when he joined in his sophomore year, a choice that influenced his life greatly. He has achieved consistent results in his written competition, winning first place at states and fourth place at ICDC during his first year. He was subsequently selected as the co-president of his chapter, where he has since relentlessly served his members by motivating them to succeed and proven his leadership skills.
Having begun his own business in fifth grade, Greg has always had an entrepreneurial vision. He attained deep insight in international trade, leading the successful expansion of his business from a small resell operation to an internationally organized online vendor.
Aside from DECA, Greg plays the alto saxophone and enjoys running. In addition, Greg is extremely interested in French and belongs to Irvington’s French Honor Society (SHF). He is also particularly passionate about environmental science and plans to study and pursue a career in energy resource engineering.
Greg is immensely appreciative of the support he has received from his parents, chapter members, friends, and advisor, Alberto Ballado. He is eager to execute the plans he has in mind, and he hopes that everyone is as passionate as he is in creating a remarkable experience for California DECA members in the upcoming year.

Albert Zeng is a student at Monta Vista High School and is thrilled to serve as your State Vice President of Silicon Valley. Hearing about DECA as a freshman, Albert was initially unsure if joining DECA was right for him. Now, after 2 years of meeting incredible people and making unforgettable memories at district, state, and international conferences, he looks back on his decision as the best choice he has ever made. Last year, Albert served as a chapter officer, increasing membership and boosting competitive excellence, as well as a Silicon Valley DECA County VP, connecting with different chapters and encouraging the growth of new chapters. He plans to utilize what he has learned in order to bring not only Silicon Valley but also the rest of the state to even greater heights.

Albert enjoys helping others in his free time and often does work in the community. He is privileged to serve as the President of HEARTS, a nonprofit organization dedicated to providing education to underprivileged children all around the world. Albert’s hobbies include figure skating, watching wildlife, and reading random Wikipedia pages. His favorite animal is the Canada Goose, a bird that can be found in many parks near his home.

Albert is extremely appreciative of the support he receives from his friends, family, chapter, and chapter advisor, Carl Schmidt. Albert is ecstatic to serve California DECA and looks forward to making our state excel!