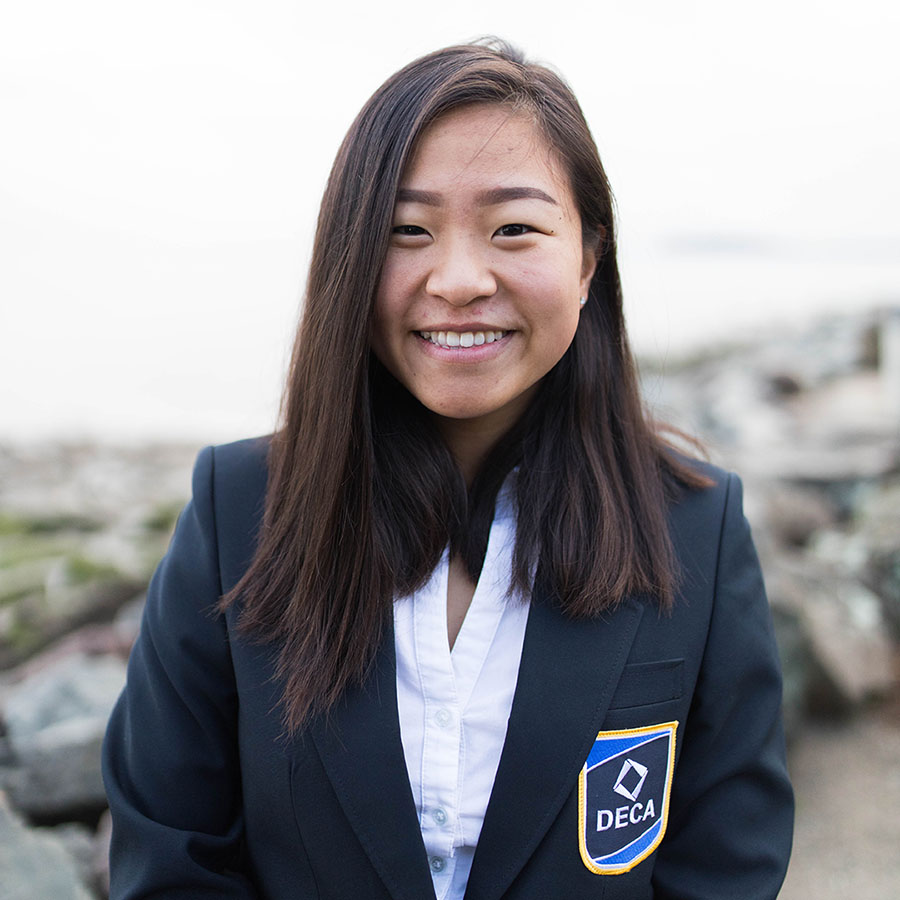 Emily was a senior at Mission San Jose High School and was extremely honored to serve as California DECA’s State President.

Having been involved in DECA since her freshman year, Emily knew right after her first LACE that DECA would be the defining aspect of her high school career. Since then, it’s been a long journey of challenges, successes, and, most importantly, growth. From not even earning a mini-award at SVCDC to placing seventh at ICDC, Emily has so many people to thank for their help in shaping her into her current self.

Outside of DECA, Emily is actively involved in her school’s ASB. She credits DECA to sparking her passions for leadership and networking, and is excited to see where else those passions take her. Emily’s hobbies include dancing, nurturing miniature plants, and baking pastries.

Emily hopes to one day settle down and adopt multiple dogs, but for the time being, she’s working hard to give back to the organization that’s given her so much. 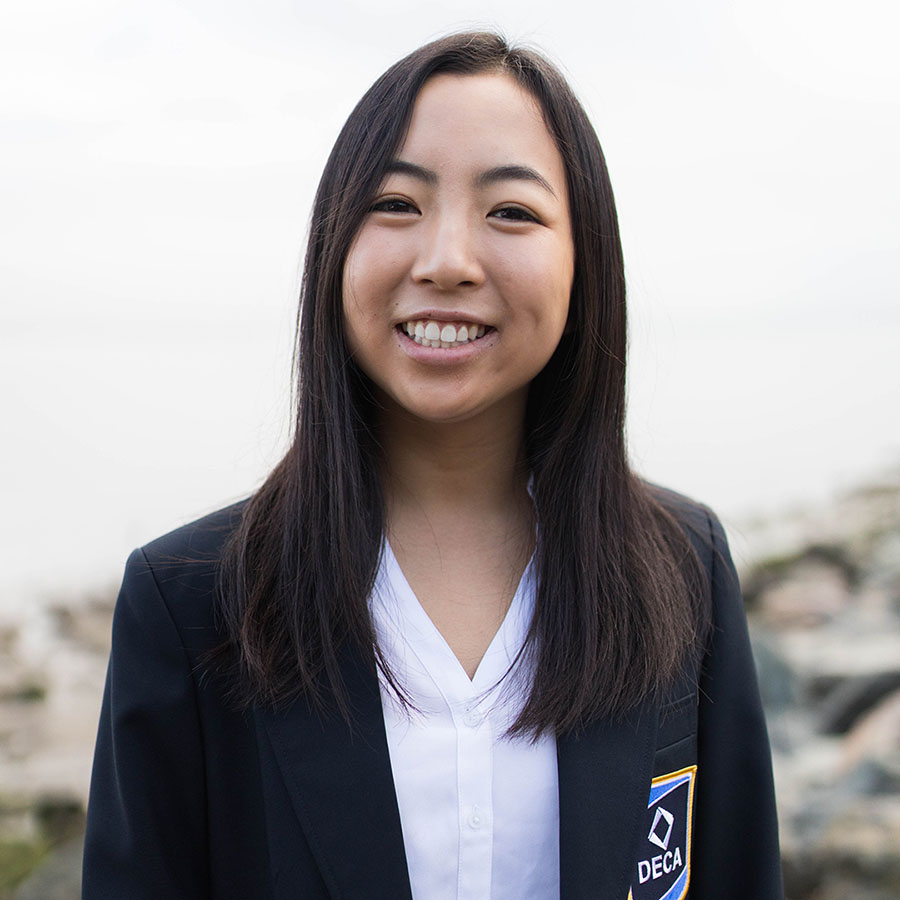 Elisa was a junior at Valley Christian High School and was extremely excited to serve as your California DECA Vice President of Communications this year.

Elisa joined DECA her freshman year of high school and fell in love with the fast-paced environment and dedicated members. Through DECA, she found her passion for business, something she wants to pursue in the future. Elisa’s passion allowed her to become the Vice President of Role Plays at her own chapter last year, a position in which she was able to help members achieve competitive success. She is extremely grateful for the successes and challenges of her DECA journey which have shaped her into who she is today.

Outside of DECA, Elisa is extremely passionate about photography and videography. She loves to be able to capture moments to be able to remember them forever. In addition, she loves eating, hiking, and traveling around the world. Her favorite foods are poke, acai, and burritos.

Elisa is incredibly grateful for her friends and family that have guided and supported her through her DECA journey. She is looking forward to a year of serving alongside an amazing team and being able to give back to this organization that gave her so much. 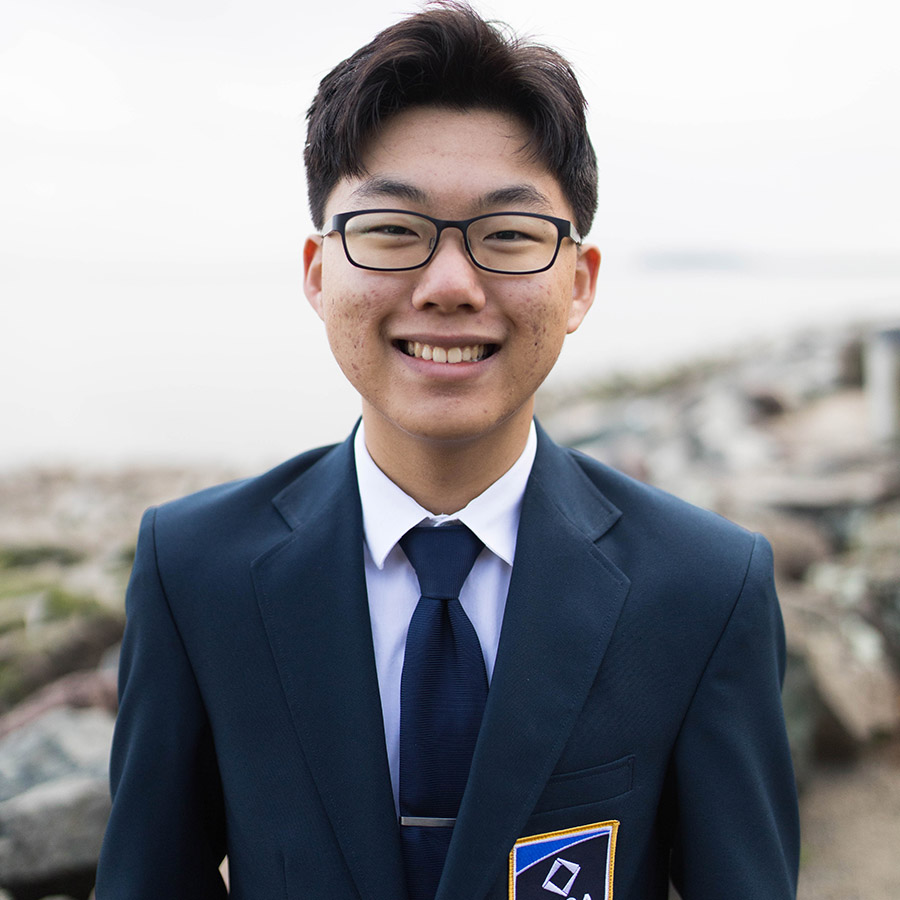 Won Bin Lee was a senior at Dougherty Valley High School and was extremely grateful to serve you as your California DECA Vice President of Public Relations.

Like many members, Won Bin joined DECA as a freshman during a Club Day frenzy without understanding its full potential. However, the competitive experiences, mentorship, successes, and shortcomings he encountered during the year quickly changed his mind, and DECA became a core part of his life. Won Bin’s competitive experience since then has included landing second at his first NorCal CDC, competing at ICDC 2017 in the School-Based Enterprise event, and placing first and second for his events at SCDC 2018.

Outside of DECA, Won Bin enjoys reading, taking naps, and playing guitar. He also loves attending Model United Nations conferences and debating about real policy issues from around the world. Won Bin hopes to attend a four-year college with an economics major, start a company, and write a book.

More than anything, Won Bin is beyond thankful for everyone who has supported him during his DECA journey, and aims to work with Team 68 in order to make the 2018-19 year a winning year for every member in California. 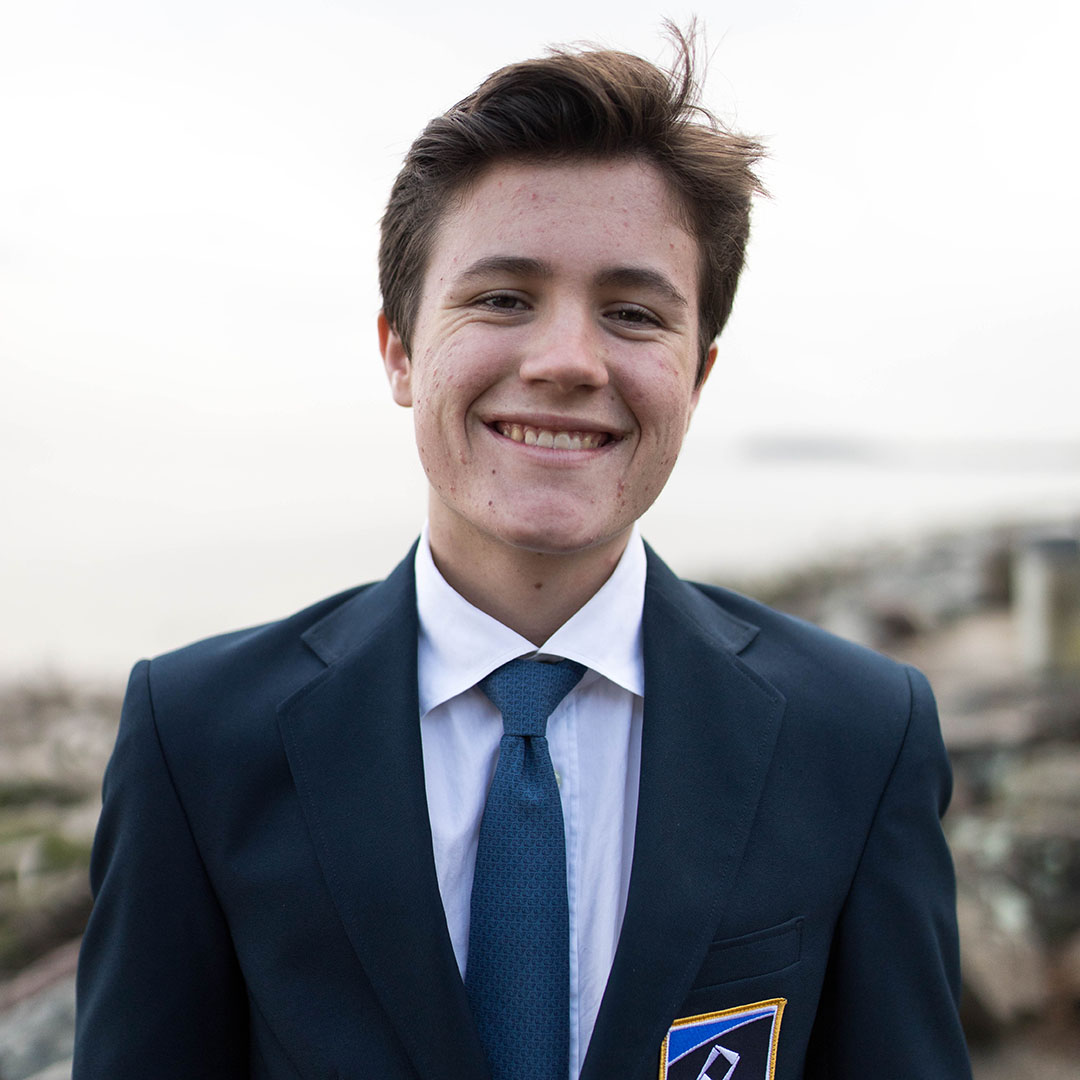 John “Duke” O’Callahan was a sophomore at Santa Monica High School and was thrilled to serve as VP of SoCal.

As a freshman, Duke attended Loyola High School where he played lacrosse and competed in his school’s stock market game. Although this is Duke’s first year in DECA, he has had a deep passion for business since he was four years old. Duke founded a streetwear clothing brand this past year. He is also currently programming a social network that allows students from all across the world to come together to provide solutions to global and local issues. Duke is also seen on camera when acting in school films and productions.
This year, in his role, Duke hopes to create corporate partnerships, more CTE opportunities at schools in SoCal, and increase interaction between chapters through civic activities. At Santa Monica DECA, he placed overall at the Mini Competition at MLK High School. He also placed overall at Southern California’s CDC and competed in the International Stock Market Game.

In the future, Duke hopes to attend Stanford University. As a career, he isn’t quite sure what he’d like to do, but he wants to inspire true respect, responsibility, and empathy for the environment. He really aspires to spread human kindness through acceptance. This year, California DECA can expect a year of positivity and growth. 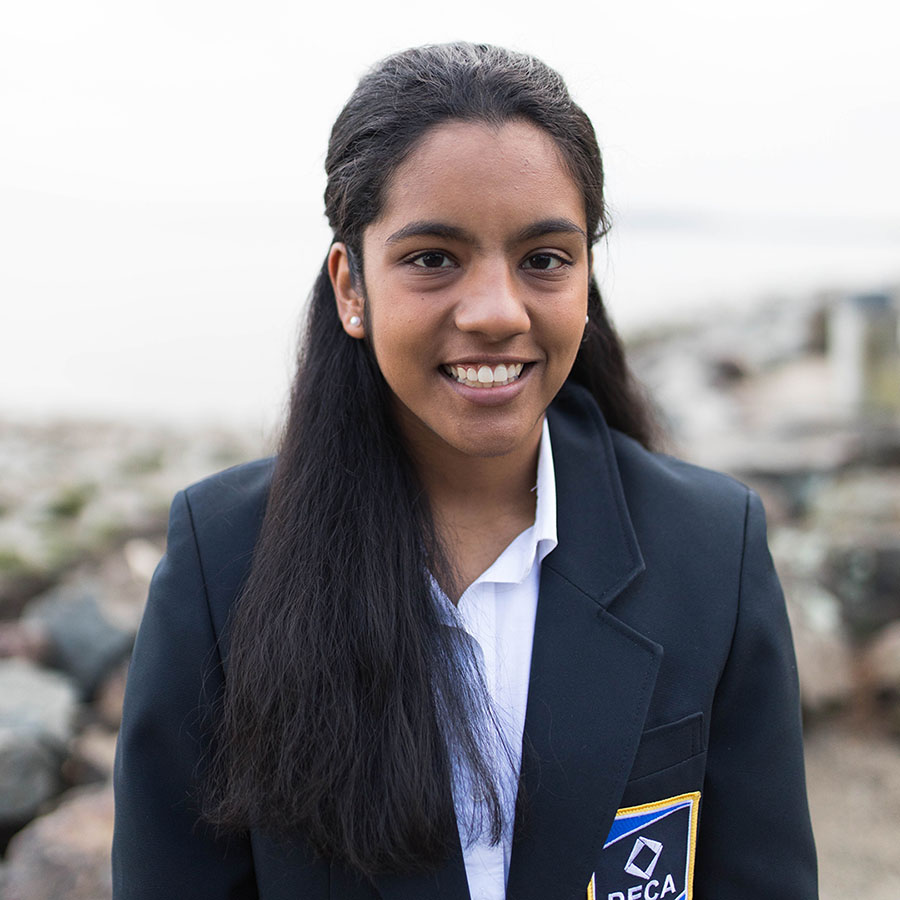 Ananya was a senior at Washington High School and was honored to be elected as your 2018-2019 Vice President of Northern California.

Joining DECA as a freshman, she did not know what to expect. Since then, she was not only able to develop her leadership skills but also grew as an individual. Her passion for DECA allowed her to serve as her chapter’s New Member Director and as the Vice President of Career Development for the Northern California District Action Team.

Outside of DECA, Ananya leads a public speaking workshop for the organization Ideal Kids, interns at JB Drafting and Design, and is on her school dance team. She enjoys painting, playing the piano and spending time with her family and friends.

Ananya is beyond excited to serve as a state officer for California DECA and is grateful to everyone who has helped her achieve this. She would like to thank her family, chapter members, and advisor, Mr.Wu for supporting her throughout this journey. She looks forward to working with Team 68 to give back to the organization that has given her so much. 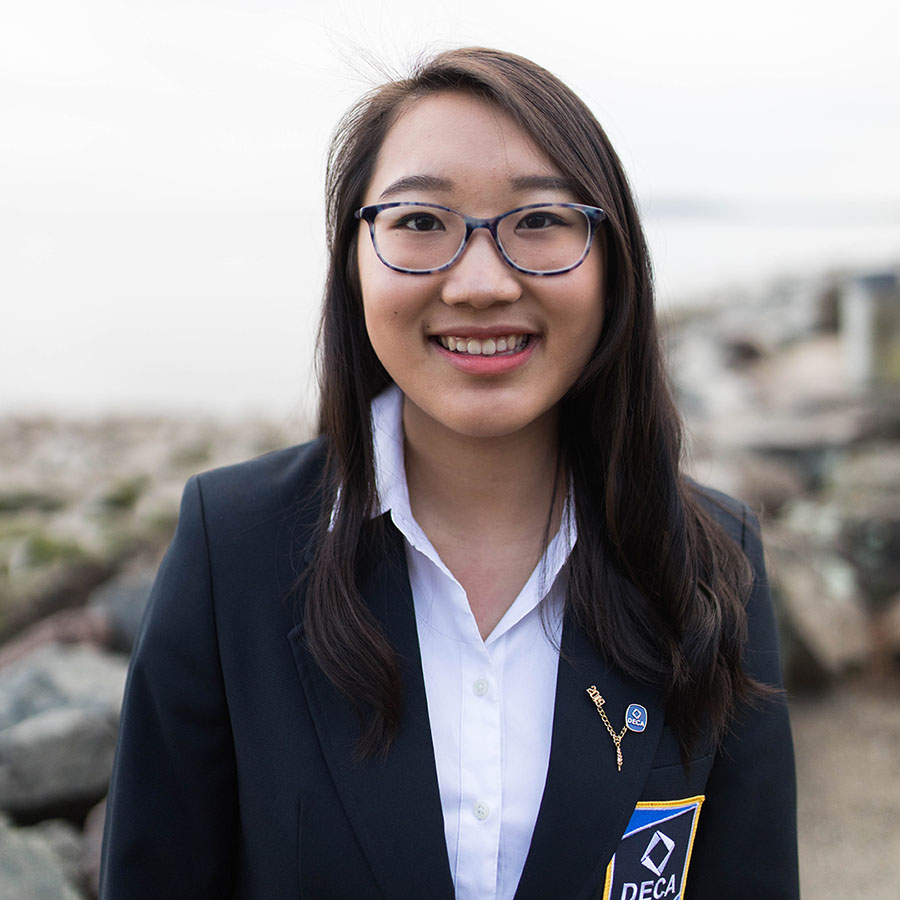 Enya was a senior from The Harker School and was thrilled to serve as the Vice President of Silicon Valley for California DECA!

She stumbled upon DECA in ninth grade and joined on a whim, attracted to the variety of opportunities DECA offered and the community it created for her to bond with others at a new school. Moreover, Enya discovered her interest in finance through DECA’s competitive events; she actively competes in finance events, and she has placed first and fourth respectively at ICDC in the past two years.

Enya is actively involved with her chapter, having served as Director of Roleplays and VP of Competitions, and currently heads the competitive mentorship program at Harker. Mentorship is her passion, and she spends many afternoons judging roleplays, revising written reports, and offering leadership guidance to DECA members.

Aside from DECA, Enya serves as the President of Harker’s Academic Decathlon team and heads her school’s podcast network. She is also a big k-pop and c-pop fan, and enjoys learning songs, practicing dances with her friends, and translating.

As VP of Silicon Valley, Enya aims to increase transparency and foster open communication among the district and CA DECA, increase fundraising efforts for travel grants and chapter support, recover and add more schools to the SV family, and support mock conferences in SV. She hopes to pursue a career in finance or media, and is extremely thankful to the advisors, CADECA management, parents, and DECA members for supporting her journey.