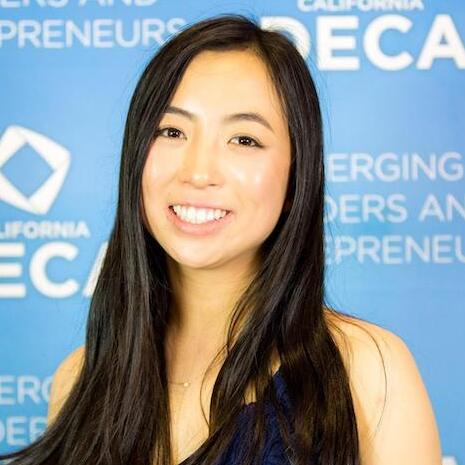 Elisa was a senior at Valley Christian High School and couldn’t wait to serve as the California DECA State President.
Elisa joined DECA in freshman year and quickly fell in love with this organization. Surrounded by dedicated members in a fast-­paced environment, Elisa has grown incredibly since her freshman self. She’s enjoyed the competition, networking, and learning opportunities which DECA has provided her. Through DECA, Elisa has made countless friends and gained skills valuable to every part of her life. She is grateful to all the challenges and successes which have shaped her into the individual she is today.

In DECA, Elisa has served as the Vice President of Communications for California DECA as well as Board Member and Director of Roleplays for Valley Christian DECA. Through it all, Elisa has enjoyed helping more people grow in this life­ changing organization.

Outside of DECA, Elisa enjoys debate, photography, and videography. As a passionate portrait photographer, she loves to capture photos of her friends and family. She enjoys traveling to new places and trying new foods. Her favorite foods are burritos, matcha lattes, and poke bowls.

Elisa is incredibly grateful for her friends and family that have guided and supported her through her DECA journey. She looked forward to a year of serving alongside an amazing team and being able to give back to this organization that gave her so much. During her year of service, she strived to grow the organization and improve connectivity while maintaining California DECA’s unique culture. 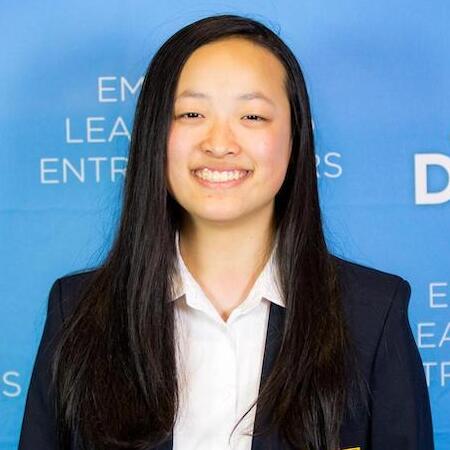 Amory was a junior at Lynbrook High School and was honored to serve as your California DECA Vice President of Leadership.

Joining DECA on a whim her freshman year, Amory found herself swept up in a unique culture of competition and community. After her first SVCDC, DECA quickly became an integral part of her high school life, leading to placing third and fourth at SCDC 2018 and competing at ICDC for her Principles event. In sophomore year, Amory became the Director of Principles Events for her own chapter, allowing her to mentor new members and witness the potential of DECA leadership opportunities.

Outside of DECA, Amory serves on her school’s ASB, plays the piano, and was involved in Lynbrook STEM and design clubs. She has a variety of interests and is grateful that her DECA skills have helped with all of her passions. In addition, Amory loves sleeping, bullet journaling, and finding study spots.

Amory has many people to thank, including her chapter, advisors, and fellow officers, for her growth in DECA. She was extremely grateful for the opportunities that DECA has given her in the past, and was excited to share these opportunities with members of California DECA. She had an amazing year filled with leadership and service alongside the State Officer Team. 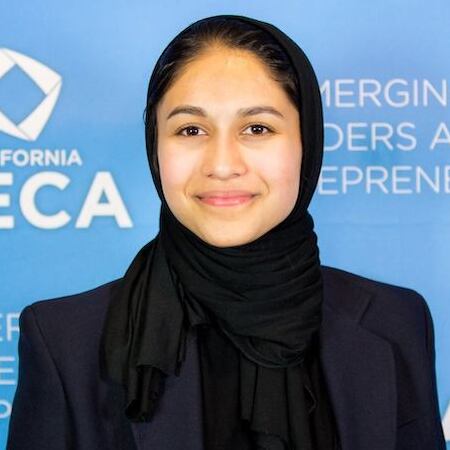 Mariam Mustafa was a senior at Irvington High School in Fremont, California, and was thrilled to serve as you California DECA Vice President of Marketing. Being involved in DECA ever since her sophomore year, she has grown as a member and leader and discovered personal hidden fascinations and talents, all while providing herself with a platform to be a part of something greater than herself. Mariam’s experiences in DECA have guided her to utilize different perspectives and further understand the world around her.

Outside of DECA, Mariam was heavily involved in various student-leadership organizations. She has been part of ASB for nearly 8 years, and previously served as her school’s Junior Class Secretary. Additionally, she serves as a district representative and student board member for the Fremont Unified School District Board of Education. Her favorite hobbies include video editing, eating, running, discovering new TV shows, and spending time with her family and friends.

Mariam is extremely appreciative of her friends, family, chapter, and advisors for their unwavering support and guidance. She was excited to work with Team 69 and hopes to give back to the organization that has provided her with limitless opportunities. 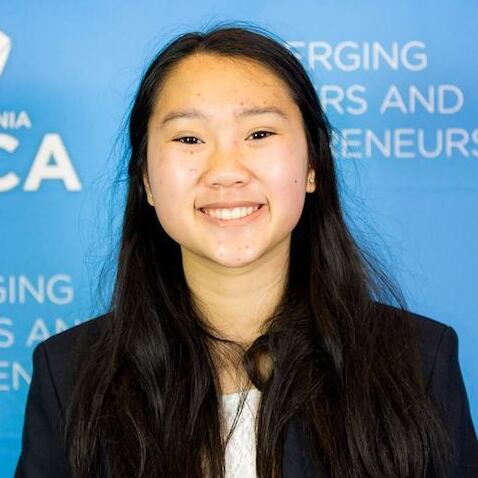 Kaitlyn Phan was a senior at Irvington High School and was honored to serve as your 2019-2020 Vice President of Northern California.

After joining DECA her freshman year, she fell in love with the supportive community, late nights working on writtens, and workshops taught by chapter officers. Through DECA, she has overcome her fear of public speaking and went on to place 2nd at her first ICDC in MTDM. Her appreciation for the organization and its members deepened after serving as her chapter’s Director of TDMs and Vice President of Chapter Relations.

Outside of DECA, Kaitlyn serves as her high school ASB’s Director of Public Relations, teaches the Life Skills class at her local afterschool program for children with special needs, and serves on the planning committee for EDGE Youth Leadership. In her free time, she enjoys hiking, baking meringue cookies, and making crafts for her friends.

Kaitlyn is thankful for everyone who has supported her on her DECA journey, especially her parents, advisor, and all of Northern California DECA. She was ready to support chapter fundraising efforts, connect the chapters, help new chapters grow and thrive, and improve judge training. She was beyond excited to serve as your Vice President of Northern California. 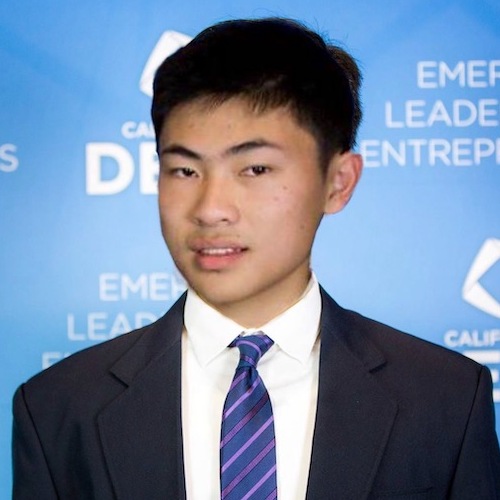 Tylor was a senior at Mission San Jose High School and was eager to serve as the Vice President of Silicon Valley this year.

He joined DECA his freshman year at his brother’s suggestion, without any idea of how it would change him. During his time in DECA, Tylor has been able to meet new people and compete at ICDC in three different events, placing top ten in his freshman year.

Tylor has served as the Vice President of Operations and Event Coordinator within his local chapter. He has organized events and conference logistics for his chapter as well as serving as a mentor for first year members.

Aside from DECA, Tylor enjoys cycling, cooking, and broadway musicals. He also serves as a Science Bowl coach for sixth grade students. Although unsure of what career or degree he’d like to pursue, Tylor hopes to integrate his interests in his future.

He is extremely thankful for his brother, whom he considers one of the greatest influences in his life, for encouraging him to join DECA. As VP of Silicon Valley, Tylor hopes to bring the chapters of SV closer together and encourage more people to participate in DECA. 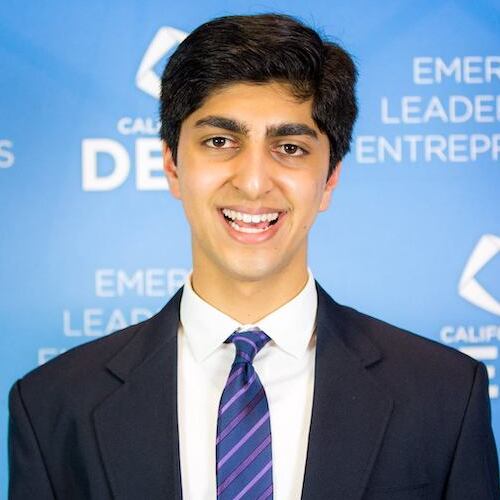 Matthew Allana was a senior at Beverly Hills High School and was thrilled to serve as your Vice President of Southern California.

Matthew joined DECA as a sophomore without fully realizing what it entailed but was gradually sucked in and came to love the organization. DECA has since become such a core part of Matthew’s life that it influenced him to change his career path to one with a greater focus on business. Matthew’s competitive success includes placing fifth at ICDC in 2018, being the first person from his chapter to ever place in the top ten.

Matthew serves as the Vice President of Mentorship for his chapter, a position in which he developed a mentor program that helped to dramatically improve his chapter’s competitive success, as evidenced by the six-fold increase in ICDC qualifiers from three in 2018 to eighteen in 2019.

Outside of DECA, Matthew serves on his school’s ASB, created a student ambassador program for his school, was a reporter for a youth media organization, launched a network of high school clubs to drive political and social awareness among teens (The Emperor’s New Clothes), and was actively involved in his church’s youth ministries. Matthew also loves reading, eating, and hanging out with friends.

Above all, Matthew is extremely thankful for everyone who has supported him on his DECA journey and was excited to work as a state officer to make California DECA better than ever.