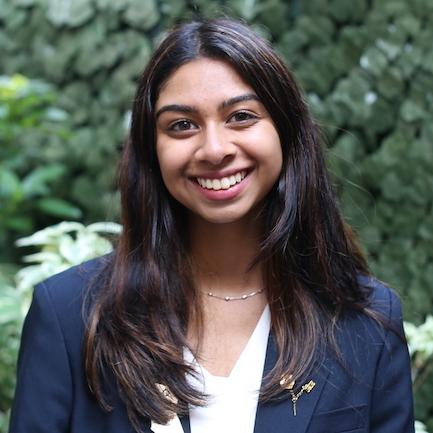 Ramya is a senior at Irvington High School and is honored to serve as your California DECA State President this year.

Ramya joined DECA her freshman year, unaware of the amazing opportunities and community that DECA forges for all of its members. Immediately after her first experience at Norcal CDC, Ramya realized she had found her passion for business through DECA and understood the special connections, skills, and networking DECA provides for each and every individual. Through this, she decided she wanted to expand this role of leadership to give back to this supportive community of DECA members. She is eternally grateful for the connections she has built and all the memories DECA has given her in the past two years.

In her sophomore year, Ramya served as her chapter’s Director of TDM’s. This position allowed her to help new members, as well as returning members of her chapter, learn and experience the plethora of opportunities DECA provides for its members. Her time in the chapter office inspired her to run for and serve as California DECA’s Vice President of Marketing in her junior year. These leadership positions allowed her to strengthen her professional skills, mentor students in their DECA journey, and meet many people who have inspired her to develop her leadership skills.

Outside of DECA, Ramya loves to play badminton and the piano and is active in her school’s Mock Trial club. Additionally, she loves to learn different forms of crafts, artwork, and tinker with jewelry. She loves to creatively expand her knowledge whether it be learning a new trick on adobe or making paper mâché and is grateful DECA has helped her in all her other interests.

Ramya is extremely thankful for everyone who has helped her along this journey including her advisor Alberto Ballado, fellow officers, parents, and all of her chapter members. She is extremely grateful for the opportunities that DECA has given her in the past, and is excited to share these opportunities with members of California DECA. She looks forward to an amazing year filled with leadership and service alongside the state officer team. 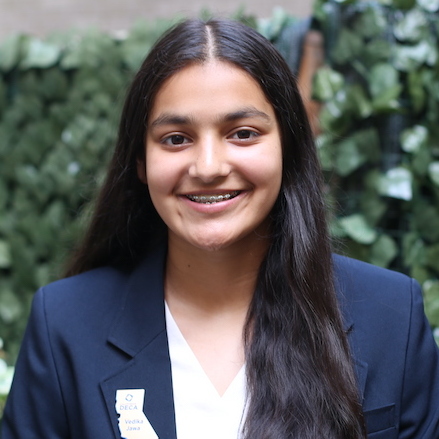 Vedika is a senior at Washington High School and can’t wait to serve as your California DECA Vice President of Leadership this year.

Vedika joined DECA her freshman year and after attending her first conference, she soon fell in love with the organization. She has grown so much since her freshman self and enjoys the competition, networking, and learning opportunities DECA has provided her with.

For the past two years, Vedika has gotten the opportunity to serve as her chapter’s Internal Affairs Director and the Fundraising Director. In an effort to improve the experience of her chapter’s members she started a variety of new initiatives. These positions allowed Vedika to see how much she enjoyed helping her chapter’s members and also realize that she wanted to make an impact at the state level.

Outside of DECA, Vedika is an active student and athlete. She loves to bake and it was this love for baking that led her to start Bake4Sake, a nonprofit organization that aims to distribute fresh desserts to those in need. Vedika also loves to write and recently got the opportunity to write for newspapers including USA Today, the Mercury News, and the Washington Times. Additionally, she has always loved to play basketball and is currently part of her school’s basketball team.

Vedika is so grateful to all the members, alumni, and chaperones who have helped her out these past 4 years. She would also like to thank her advisor, Mr. Wu who has supported her throughout her DECA journey. Vedika is extremely excited to be given the opportunity to serve as the VP of Leadership and is looking forward to a year filled with unforgettable memories. 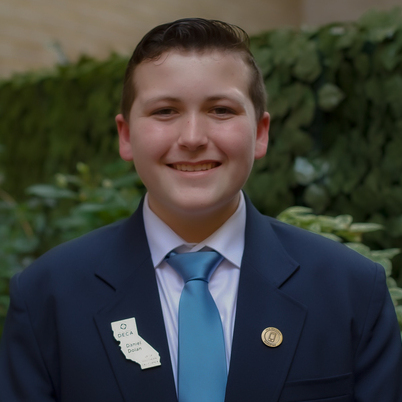 Daniel is a junior at Del Norte High School and is thrilled to serve as your California DECA Vice President of Marketing this year.

Daniel joined DECA his freshman year. and at his first mini-conference, he quickly became enthralled in the many delights DECA had to offer, netting some sub-event awards and becoming determined to excel higher faster. He went on to the Southern California district conference, competing in Hotel and Lodging Management, and swept his event, which ignited a passion for DECA that led him down the path of networking, opportunity, and business relations. Through this path, he now stands ready to keep going forward in DECA.

In his freshman year, Daniel was appointed his chapter’s secretary and served in that position all the way through his sophomore year. He cooked up some projects that came to fruition, such as recruitment methods for the start of the year and presentations in business classes to grow the chapter, and helped to bring his chapter to new heights.

Daniel can often be seen working on some of his other extracurriculars outside of DECA, such as his school’s Civics Club, ASB, and Speech & Debate. He’s very active in politics and always looking for ways to help bring his peers into that spotlight, while also working on public speaking and how to improve his school. In his free time, he can often be found sketching or playing a strategy game.

Overall, Daniel is extremely grateful for all the support he’s gained; from the members and chapters who supported him in both his campaigns, from his friends and family who backed him throughout his DECA journey, and to his advisor, Mr. Campillo, who gave him the support to make his journey possible. Daniel is extremely grateful for the opportunity to serve as Team 71’s VP of Marketing and is ready for a year of bringing CA DECA forward. 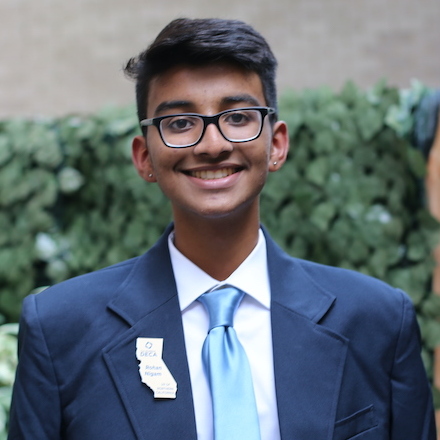 Rohan is a senior at Washington High School and is excited to serve as your California DECA Vice President of Northern California this year.

Rohan joined DECA during his freshman year and was immediately fascinated with the organization. He enjoyed networking with DECA members and competing against them in events. He knew he wanted to continue this for all of high school and immediately got involved within his chapter by taking on leadership positions. Over the years, DECA has helped him grow as a person and has made him who he is today.

During his sophomore year in high school, Rohan served as the VP of Marketing for Washington High School DECA. In this position, he was responsible for initial member recruitment, branding, promotions, and social media management. He decided to take his skills to the next level by serving as the VP of Career Development for the Northern California District Action Team the following year. He provided support and leadership to chapters across Northern California and worked with his team to organize a successful DECA year.

Aside from DECA, Rohan enjoys playing tennis and has been on his school’s tennis team since freshman year. Rohan also enjoys to code, which led him to co-found the Business Coding Initiative. This organization aims to educate students in his community about skills in computer science. During his free time, Rohan likes to listen to music and watch movies. You can often find him admiring cars at local car meets.

Rohan is extremely grateful for this opportunity and would like to thank his family, friends, chapter members, and advisor, Mr. Wu, for all the support. He is excited to serve as the VP of Northern California and can’t wait to work with the DAT and the rest of the state officer team. 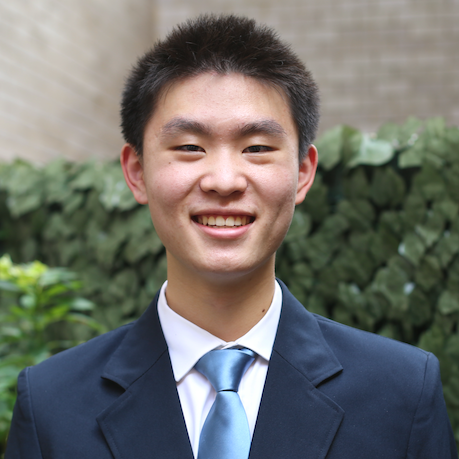 Tim is a senior at Lynbrook High School and is excited to serve as your California DECA Vice President of Silicon Valley this year.

Tim joined DECA his freshman year to explore business and was instantly blown away by both the myriad of real-life applications and the collaborative, welcoming community fostered by all California DECA members. He quickly realized that the opportunities provided were unique to DECA, such as meeting new friends at conferences and developing communication skills. Tim is grateful for everything DECA has provided.

In his sophomore year, Tim was honored to serve as his chapter’s Director of Principles where he worked with first-year students to explore the numerous opportunities that DECA provides. Encouraged by his experiences, Tim served as a Vice President in his junior year where he continued to develop his leadership skills, support DECA members, and build new relationships.

Outside of DECA, Tim is involved in STEM clubs where he is specifically interested in biology. He enjoys working with other students and meeting new people, and in his free time, you may find Tim taking photographs, reading, playing volleyball with his friends, or at the nearest boba shop.

Tim is extremely grateful to all of the individuals who have supported him on his journey, including all the members of his chapter, the officer team, his advisor, his parents, and every member he has met. He is excited to work with the state officer team to create a memorable year for California DECA. 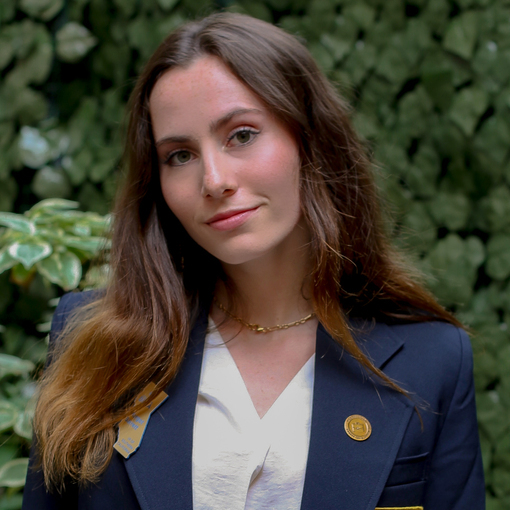 Margot is a senior at Palisades High School and is ecstatic to serve as your California DECA Vice President of Southern California this year.

Margot joined DECA freshman year and has spent her time working to improve her local chapter and increase member involvement. Margot is the Director of Fundraising at her chapter, raising over $5,000 in the last two years. She additionally has photographed conferences, started the Palisades DECA Instagram, and organized fundraising events where she helps sell student-designed merchandise; providing members with opportunities to improve networking skills while experiencing entrepreneurship firsthand.

Margot takes pride in her chapter’s accomplishments, in particular its membership growth from 20 students to over 100. Margot hopes to increase Southern California’s involvement, starting at its roots, focusing on smaller chapters’ preparation for competitions.

[hobbies & extracurriculars outside of DECA] : In her free time, Margot advocates for policy on education reform through Generation Up. Margot is extremely interested in media and is the first Editor-in-Chief of the media program at the YMCA’s Teen and Government, leading over 50 delegates. Additionally, she is a researcher for the podcast Anna Faris is Unqualified. In her free time, she enjoys her role as Pali’s mascot, Dewey Dolphin! After graduating high school, she hopes to pursue a business degree.

She is extremely grateful for the opportunities that DECA has offered and thanks to her advisor, Mr. Kolavo, for providing her with many instances to become involved within her chapter. Margot wishes to use this opportunity to encourage more students to take a step out of their comfort zone. Margot looks forward to an incredible year working alongside the state officer team.